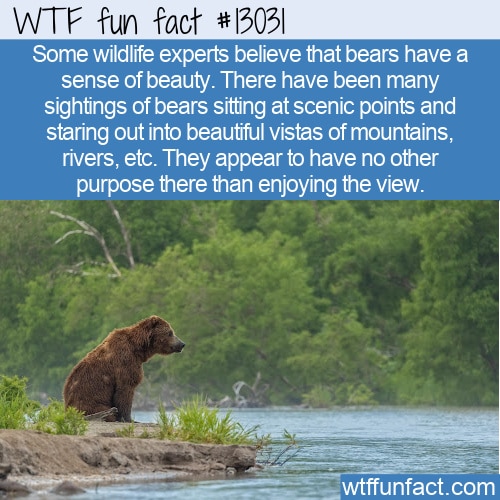 Is there a bear sense of beauty? How do we explain wild bears who are seen at scenic spots staring off into the mountains, trees, forests, and river vistas? We may never understand this behavior. But if we use our own behavior as a reference point (which humans so often do), it may be that bears – just like us – enjoy a really good view.

Do bears have a sense of beauty?

Let’s start with one thing we do know – bears are smart. Their brains are difficult for us to understand because they’re not organized in a familiar way, but their size and complexity indicate that bears have a capacity for intelligence that was previously unknown to most humans.

Now, not every bear will share the same behavior, especially when it comes to something subjective, like beauty. But the fact that some bears seem to be able to scout out a good view for the day is fascinating. Some also build their dens near scenic points (and not just the ones that humans and their picnic baskets frequent). You know what they say about real estate – location, location, location.

So, does a bear staring into the beauty of the mountains mean there’s a bear sense of beauty though?

The staring behavior was first noticed by people studying bears in the wild. After all, a bear showing up at a scenic parking lot in the Smokies is not going to arouse the same level of interest – just terror.

Canadian artist Maureen Enns and rancher Charles Russell have long been advocates of living alongside bears. They’ve also discussed the penchant for beauty they’ve witnessed from the creatures. They aren’t scientists, but they have gotten up close and personal with grizzlies and found them to be quite serene when they’re not threatened. Enns was one of the first people to publicly suggest that bears appreciate beauty. This was after seeing them gaze at a stunning view one day.

Since then, others have remarked on similar behavior. But investigating the bear’s sense of beauty doesn’t appear to be on any major research agendas right now.