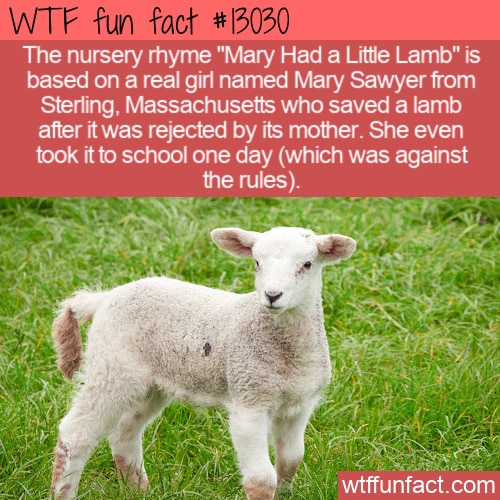 Do you remember the children’s nursery rhyme “Mary Had a Little Lamb”? Well, it turns out that it was based on a real little girl named Mary Sawyer.

Mary and her little lamb

Around 1816, a girl named Mary Sawyer from Sterling, Massachusetts headed off to school one day. And as you may have guessed by now, her lamb followed her.

There was even a book published in 1928 about that fateful day, citing all of the evidence.

It turns out that Mary adopted the little lamb after it had been rejected by its mother. It was near death, and Mary’s father refused to let it in the house so she could nurse it back to health. But Mary didn’t relent. She went and asked her mother, who allowed the lamb inside.

The lamb became Mary’s pet. She gave it milk and kept it warm, and it eventually responded to her calls and followed her everywhere.

The story recounted by Mary is that she and her brother decided to take the lamb to school one day. (And, yes, it was against the rules). They wrapped it in a blanket but when it let out a bleat, the jig was up. She had to take it home at lunchtime.

As an old woman, Mary Sawyer is said to have recounted the story to a man named John Roulstone, who wrote the nursery rhyme. However, according to the New England Historical Society (cited below): “Sarah Josepha Hale had written and published Mary’s Lamb in 1830. She included it in a little book, book, Poems for Our Children. Hale’s version of Mary Had a Little  Lamb had three additional stanzas that added a moral lesson to the tale.” In addition, there’s no written evidence that Roulstone wrote the nursery rhyme for Mary.

The controversy over a nursery rhyme

The reason there is an argument over who really wrote the nursery rhyme had to do with selling stockings knitted from the lamb’s wool.

“Mary’s mother made some stockings out of the lamb’s wool for Mary, and she treasured them. Then, when Mary was an old woman living in Somerville, Mass., preservationists started raising money to save the Old South Meeting House. Mary donated the wool from her stockings to the fundraising efforts. Volunteers picked apart the stockings and attached the wool to cards that said, ‘Knitted wool from the first fleece of Mary’s Little Lamb.’ They sold like hotcakes.”

While we still don’t know exactly who wrote the nursery rhyme first. But we know it had meaning because it was linked to the fundraising effort for the Meeting House. — WTF fun facts

Source: “Mary Had a Little Lamb – Yes, There Was a Mary and She Did Have a Little Lamb” — New England Historical Society