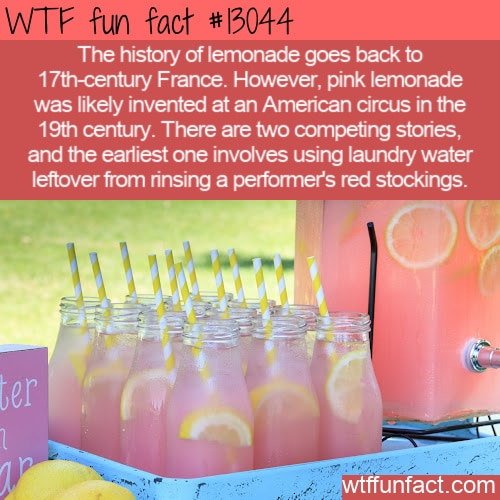 The history of lemonade is far older than we would have imagined. The same goes for the history of pink lemonade – which has its origins in the circus of all places.

The origins of lemonade

The first lemonade dates back to 1630s France and was made from sparkling water, lemons, and honey (yum!). In the U.S., that means lemonade goes back to the first immigrants in the 17th century.

The trend of harvesting ice in the 19th century made drinks like lemonade even more popular. And it makes sense that – since traveling circuses date back to around that time – it would be associated with community events.

Where does pink lemonade come from?

According to Smithsonian Magazine (cited below), “The earliest known mention of pink lemonade comes from an 1879 article in West Virginia’s Wheeling Register, explicitly linking the two.”

As for it’s precise origin, we can’t be sure. But it likely started at the circus.

In How the Hot Dog Got its Bun: Accidental Discoveries And Unexpected Inspirations That Shape What We Eat And Drink, author Josh Chetwynd says there are two stories that vie for the the best pink lemonade origin story.

“The first, he says, is a 1912 New York Times obituary for Henry E. Allott , a Chicago native who ran away to the circus in his early teens. Allott is believed to have ‘invented’ pink lemonade after accidentally dropping red-colored cinnamon candies in a vat of traditional lemonade. Adhering to the old circus adage ‘the show must go on,’ Allott simply sold the pink-hued beverage as is.”

That would be nice, but there’s an earlier origin story for the history of pink lemonade that isn’t so sweet. It was recounted by lion tamer George Conklin who “claims his brother Pete Conklin came up with pink lemonade in 1857 while selling lemonade at the circus. Conklin ran out of water and thinking on the fly, grabbed a tub of dirty water in which a performer had just finished wringing out her pink-colored tights. In true circus form, Conklin didn’t miss a beat. He marketed the drink as his new ‘strawberry lemonade,’ and a star was born.” — WTF fun facts