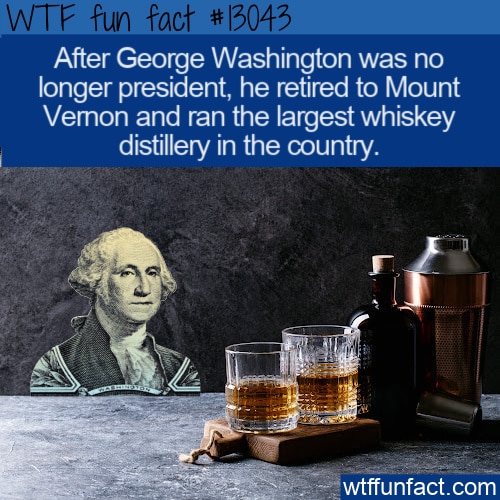 George Washington spent his post-presidential years running a booming whiskey business. Seemingly not content to retire from working life altogether, at age 65 he decided to into the alcohol trade thanks to the ability to grow rye at Mount Vernon.

In 1797, Washington returned to Mount Vernon. When he hired a Scottish plantation manager who had moved to Virginia a few years earlier, the man – James Anderson – noticed that the estate could be used to grow rye as a cover crop.

Rye not being a very popular grain for eating, Anderson pitched the idea of turning it into whiskey. Washington ran the idea past a friend who was a rum maker and presumably got the thumbs up.

Using just two stills, Anderson’s first whiskey was so appealing to Washington that he greenlit the construction of a full distillery with five stills.

What happened to Washington’s whiskey empire?

Of course, Washington also died in 1799, and he left the distillery to his nephew. Lawrence Lewis wasn’t able to keep things running. And when a fire destroyed the operation in 1814, he didn’t have it rebuilt,

The state of Virginia purchased the site of the former distillery in the 1930s. But turning it back into an alcohol producer was thwarted by Prohibition and the Depression.

It wasn’t until 1997 that archaeologists found the site of the distillery. They used imaging technology to reconstruct what it would have looked like.

Smithsonian notes that “after securing key funding from the Distilled Spirits Council of the United States (DISCUS) in 2001, a group of archaeologists, historians, and distillers …carefully searched records for hints about how the distillery functioned on an industrial level…” And by 2007, the distillery was reconstructed and opened to the public.

Today, they do distillation twice a year, just as Anderson did for Washington. And they also make peach brandy. — WTF fun facts