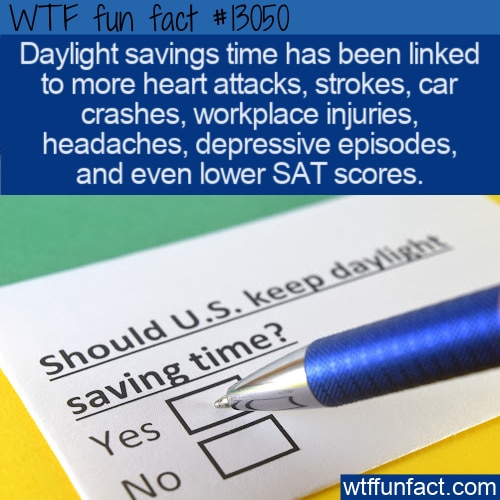 While it may be nice to “fall back” in November and get an extra hour of sleep (if you’re lucky), the cost of daylight savings time on our health is high. Is it worth it? Most Americans don’t think so.

(Also, it’s technically called daylight saving time, with no “s” at the end.)

And there are multiple studies to show these connections. It’s just not beneficial to our health to mess around with our biological clocks.

Where did the idea of daylight saving come from?

Most people believe it was Ben Franklin who came up with the idea of daylight saving. But it wasn’t. You can “thank” an entomologist from New Zealand named George Vernon Hudson for the time changes. Believe it or not, he was interested in having more daylight for hunting bugs and originally suggested a 2-hour time change.

According to National Geographic:

“Seven years later, British builder William Willett (the great-great grandfather of Coldplay frontman Chris Martin) independently hit on the idea while out horseback riding. He proposed it to England’s Parliament as a way to prevent the nation from wasting daylight. His idea was championed by Winston Churchill and Sir Arthur Conan Doyle—but was initially rejected by the British government.”

The idea came around again in 1916 when the Germans decided to pick up Britain’s idea in order to save energy.

In 1916, two years into World War I, the German government started brainstorming ways to save energy. Once they did, other countries saw the potential energy-saving benefits. In 1918, the US Congress enacted the first daylight savings law (which also formally defined US time zones as well).

While it did save energy in a coal-powered world, the US House of Representatives is trying to pass a law to end daylight saving. It’s up to the Senate to take a look at the bill now. — WTF fun facts