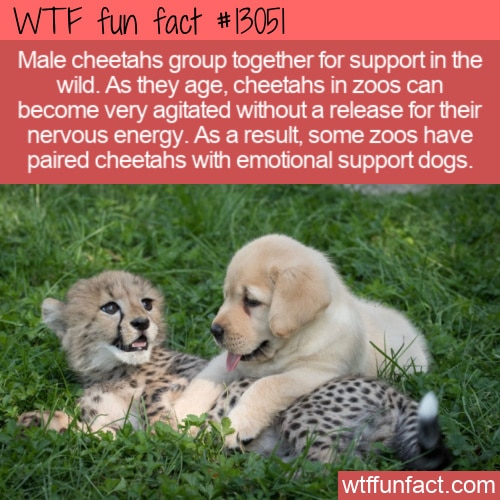 Zoos are pairing their male cheetahs with emotional support dogs so that they have companions. It turns out that pairing cheetahs and dogs is a great idea for both animals.

Why pairing cheetahs with dogs works

Cheetahs are very nervous animals. Their “fight or flight” response is largely set to flight. That means they’re always looking out for predators. But in a zoo, they don’t have any. Nevertheless, it’s an instinct, so all the nervous energy builds up inside them. Needless to say, no one wants a stressed-out cheetah.

While the San Diego Zoo was one of the first places to try pairing cheetahs with companions, the idea originated elsewhere.

According to Atlas Obscura (cited below), it all began in Oregon. “In 1976, research scientist and conservation biologist Laurie Marker was living in Winston, a town of about 3,000 people. As the curator of a cheetah-breeding program at Wildlife Safari, she found herself hand-rearing a lonely cheetah cub named Khayam.”

Marker didn’t have a littermate to entertain Khayam, so she turned to man’s best friend. More specifically, she enlisted the help of a Lab-mix named Shesho.

Khayam and Shesho grew up together and acted as surrogate siblings for one another. The experiment was a success and the dog chilled out the cheetah. “Now, when a cub that’s abandoned or orphaned ends up in human care, many zoos pair the cat with a dog as a substitute sibling,” noted Atlas Obscura.

Marker provided the San Diego Zoo with a cheetah named Arusha a few years later and recommended they raise him with a dog. That was when the pairing hit the news. Who doesn’t love an interspecies friendship story?

Cheetah moms will often forsake single cubs, so finding a way to make captive cubs happy (or save them from death by neglect in the wild) was an important move for those trying to save cheetahs from extinction. — WTF fun facts

Source: “An Emotional Support Dog Is the Only Thing That Chills Out a Cheetah” — Atlas Obscura