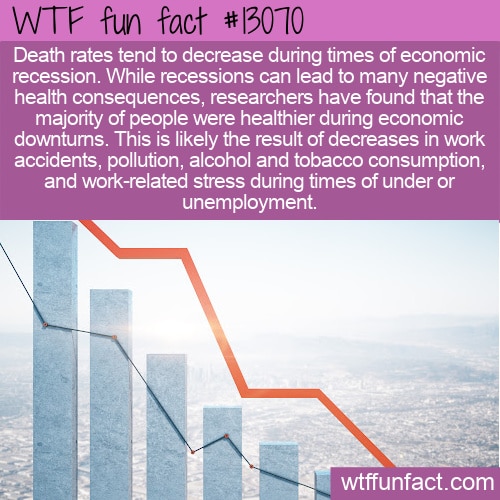 You might expect more people to become ill, have accidents, develop chronic health issues, and die during times of economic recession. After all, poverty and stress have a strong correlation and stress can often lead to fatal outcomes. But research throughout time and from around the world found a surprising correlation between recessions and mortality. Most people are healthier and live longer during economic downturns.

How are recessions and mortality related?

An article in the scientific journal Nature (cited below) found that during recessions, “the health of a majority of people improved, while the health of a minority declined.”

“One of the more predictable perks of a poor economy is fewer job-related accidents. The most-experienced workers are the ones most likely to keep their jobs during a recession, and slower production can allow for more attention to safety. People also tend to drive less, which translates to fewer traffic accidents. And fewer vehicles on the road might also help to explain why air quality is better.”

Even poor employment rates can have surprisingly beneficial effects on overall human health. Peeples quoted Tufts University’s environmental-policy specialist Mary Davis to explain: “When employment pops up, so do things related to pollution — commerce, industry, trucks on the road.” Similarly, Peeples noted that “The air-quality connection might also help explain why studies have also linked recessions to reduced cardiovascular and respiratory problems, as well as infant mortality.”

Is recession good for us?

No one would recommend a recession to improve public health. But noting the correlations can help us understand some of the issues that lead to poor health and tighter fatality rates. These can theoretically be fixed without encouraging an economic recession if organizations cut back on things like pollution and commuting and upped their worker safety protocols.

However, researchers also speculate that having less money is correlated with better health because people have less to spend on things like alcohol and tobacco. And while those without jobs face other stressors, the lack of job-related stress, the ability to get more sleep, and increasing the number of home-cooked meals are also related to better overall health.

In the past, data reveals that recessions are related to decreases in smoking and drinking and an increase in time to get physical activity. But reducing work stress and advocating for a healthy work-life balance could probably have a similar effect.

Of course, there are downsides for health during recessions. Those who do continue to drink during recessions may binge drink. Low-income and unemployed Americans also tend to have higher rates of opioid abuse. The stress of being under or unemployed can lead to self-medication. — WTF fun facts

Source: “How the next recession could save lives” — Nature