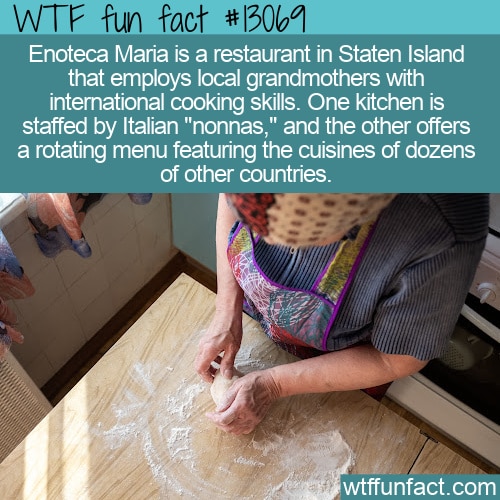 A restaurant on Staten Island has two kitchens – and both are run by grandmothers with cooking skills. Enoteca Maria’s Nonnas of the World program provides customers with a rotating series of international grandmothers who offer their own menu each night based on their homeland’s regional cuisine. The main kitchen is always staffed by an Italian nonna.

Nonnas in the kitchen

According to the restaurant website: “Our two kitchens at Enoteca Maria will continue to serve regional Italian cuisine from the nonne of Italy, while offering a second menu of a different nonna every night from any and every country in the world.” Start following the online book that is being generated atÂ www.nonnasoftheworld.com“

The restaurant’s unique angle was born out of tragedy. According to Atlas Obscura (cited below): “The project came about after owner Joe Scaravella lost his mother in the early 2000s. When he opened Enoteca Maria two years later, Scaravella staffed his kitchen with Italian grandmothers (“nonnas”) to create a feeling of homey comfort in his restaurant.”

Once the restaurant was up and running, Scaravella tried an experiment. In 2015, he invited a Pakistani grandmother to cook for a night. It was such a success that he opened up a second kitchen in the restaurant with its own rotating menu of international cuisine. Patrons can choose from the Italian nonna or the international nonna menu.

While the nonnas are all skilled in regional cuisine, these days they live in and around Brooklyn. Atlas Obscura notes that “To date, Nonnas of the World has featured cooks from Japan, Syria, France, Bangladesh, Venezuela, Poland, Greece, Turkey, Liberia, Kazakhstan, the Dominican Republic, Czechia, Belarus, Pakistan, and of course, Italy, just to name a few.”

How does it work?

“Two nonnas work in the kitchen at any given time, one as the head chef, the other as her sous chef. This means a South American nonna and a Middle Eastern nonna could be working side by side in the kitchen, learning from each other’s recipes. Cooking classes are offered as well—for women only, many of whom are grandmothers themselves—and get booked months in advance. It’s another opportunity for cross-cultural recipe sharing, as well as a chance to eat food made with love.”