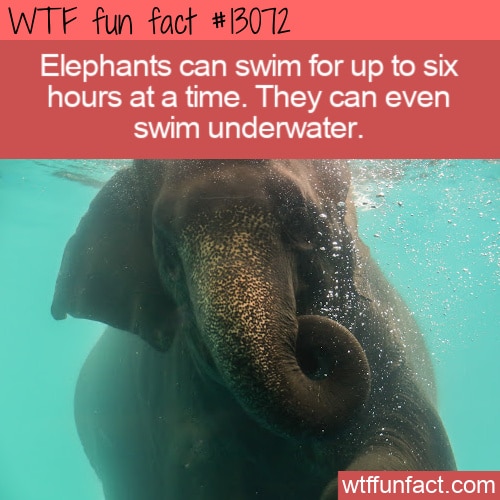 Despite their size and weight, elephants swim with great skill. They can cross rivers, swim underwater, and even float when they get tired.

How do elephants swim?

The elephant’s trunk is one of its best swimming tools. It acts as a snorkel when they go underwater, helping them breathe.

Not all elephants get the chance to swim unless they live in swampy areas or near deep enough rivers. But they’re built to do it. Even their feet have webbing that helps them glide through the water. Their ears help them keep water out of their ear canals, and their tails can even act as rudders.

Elephants aren’t born knowing how to swim. They typically learn how to use their trunk as a snorkel at a few months old. That’s when their mother brings them to a nearby body of water and watches over them while they learn.

Despite looking like they’d immediately sink to the bottom of the water, elephants are also naturally buoyant. That makes it very difficult for them to drown (unless they get caught up in rapids).

“Elephants typically swim using somewhat of a breaststroke. For us humans, this will be comparable to a “doggy swim” type of stroke rather than a clean human breaststroke.
The elephants’ four legs are used to propel them through the water. Their legs are so powerful that they can swim continuously for as long as six hours! An elephant’s head and torso are generally kept just below the surface of the water as it paddles its massive limbs back and forth on a typical swim.”

The longest recorded elephant swim was 22 miles and 6 meters deep!

But typically they go for short swims to cool off. Distance swimming only occurs when they need to cross a body of water. — WTF fun facts

Source: “Can Elephants swim? They even swim underwater!” — Elephant Guide