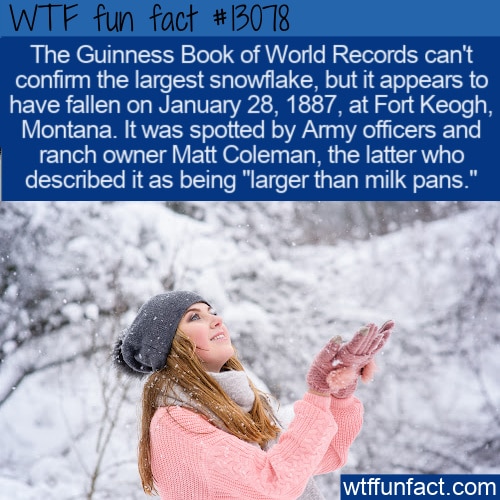 We really can’t picture the world’s biggest snowflake. Apparently, it was 15 inches long. But there is no photo since it was spotted by multiple people all the way back in 1887. Nothing has overtaken it in the Guinness Book of World Records because…well, how do you preserve a snowflake long enough to prove it?

According to the Guinness Book of World Records page for the “largest snowflake”: “It is reported that on 28 Jan 1887 at Fort Keogh, Montana, USA, ranch owner Matt Coleman measured a snowflake that was 15in 38cm wide and 8in 20cm thick, which he later described as being ‘larger than milk pans’ in Monthly Weather Review Magazine.”

Experts insist that snowflakes as large as frisbees or basketballs aren’t entirely out of the question – but they’re likely multiple snowflakes attached to one another.

Yet, since the 19th century, there have been multiple recorded sightings of such giant flakes falling from the sky (and really falling since their weight and size would make them fall faster than small snowflakes).

According to the NYT (cited below), there are still questions.

“But the evidence was always sketchy and, because of the fragile nature of snowflakes, fleeting. The giant flakes were not quite in the category of sea monsters or U.F.O.’s. Even so, skeptics noted the human fondness for exaggeration, as well as the lack of convincing photographs. And the organizations that compile weather records never made tracking big flakes an observational requirement. So the giants languished in a twilight world of science, their existence claimed but seldom documented.”

Snowflakes can get BIG

Maybe there really was a 15-inch snowflake. Multiple Army officers reported seeing them, as did a nearby rancher in Montana where they fell. But what other evidence could we reasonably expect?

There’s not much restricting the possible size of snowflakes other than the wind. It’s likely that a truly huge flake would be torn apart before anyone could see it.

Yet, if you look back far (and wide) enough in history, there are multiple mentions of abnormally large flakes. These days, anyone with a ruler and a camera could document the world’s biggest snowflake if they wanted to.

According to the NYT:

“William S. Pike, a British weather observer for the Royal Meteorological Society, found 11 poorly known reports, which he described in The Journal of Meteorology in January 1988. He wrote that reliable observers of big flakes estimated their diameters at anywhere from two to six inches.” — WTF fun facts