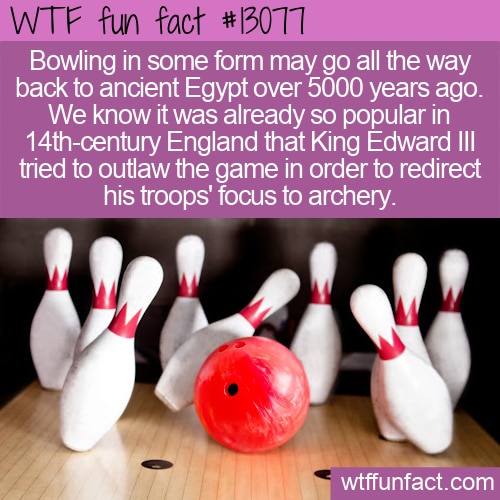 Who knew the origin of bowling goes back thousands of years?! It could go back to over 5000 years, to be exact.

What is the origin of bowling?

According to the International Bowling Museum and Hall of Fame (cited below): “A British anthropologist, Sir Flinders Petrie, discovered in the 1930’s a collection of objects in a child’s grave in Egypt that appeared to him to be used for a crude form of bowling. If he was correct, then bowling traces its ancestry to 3200 BC.”

If Petrie’s assessment is inaccurate, bowling would still be many centuries old. It could go back to 300 AD Germany. At the latest, we know bowling was already popular in 1366 in England “A German historian, William Pehle, asserted that bowling began in his country about 300 AD. There is substantial evidence that a form of bowling was in vogue in England in 1366, “when King Edward III allegedly outlawed it to keep his troops focused on archery practice. And it is almost certain that bowling was popular during the reign of King Henry VIII.”

Of course, ancient and medieval bowling didn’t have the same technology as we do today. These games were variations on trying to hit pins with balls.

Immigrants from Germany, England, and the Netherlands all brought their own pin games to America, where lawn bowling became popular.

But bowling was rarely a wholesome sport. Aside from getting banned in England briefly in the 14th century, “An 1841 Connecticut law made it illegal to maintain ‘any ninepin lanes,’, probably because bowling was the object of much gambling.” By this time, New England mansions were already home to personal bowling lanes.

“While it is uncertain where the tenpin game evolved, by the late 1800s it was prevalent in many states such as New York, Ohio and as far “west” as Illinois. However, details like ball weights and pin dimensions varied by region. But that changed when restauratnteur Joe Thum finally pulled together representatives of the various regional bowling clubs. On September 9, 1895, at Beethoven Hall in New York City, the American Bowling Congress was born. Soon, standardization would be established, and major national competitions could be held.”

In 1914, we saw the first modern bowling balls in America. By 1952, we had automatic pin setters and bowling was becoming popular on television. — WTF fun facts