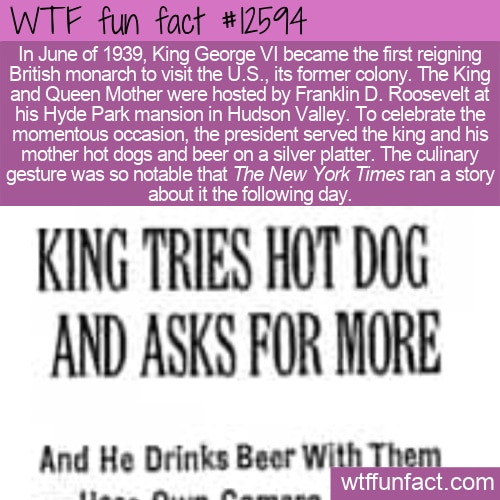 King George VI was the first sitting British ruler to visit a U.S. president. It was kind of a big deal after the whole Revolutionary War and the sore feelings that left.

Franklin Delano Roosevelt was president at the time and wanted to give the king a royal greeting, American style.

Of course there was a state dinner with all the attendant fancy food. But it was a casual picnic that really made the trip memorable because that’s when King George VI had his first hot dog on June 11, 1939.

It was a private picnic, but the hot dog moment was anything but a secret. In fact, a NYT headline the following day read: “King Tries Hot Dog and Asks For More.”

The brand was Swift, for those who need to know these things. And the king very appropriately had a beer with his 2 hot dogs as well, according to the Times.

Looking back on the moment in 2009, Dan Barry wrote in the NYT:

“There is no record of the founding fathers ever eating hot dogs, no trace, for example, of mustard on the Declaration of Independence. But the hot dog has played a role in American foreign relations since at least June 1939, when the king and queen of England attended a picnic at President Franklin D. Roosevelt’s estate in Hyde Park, N.Y., while soliciting American support for England in the war about to consume Europe.”

The king’s mother was with him at the time and also partook in a hot dog – but she is said to have eaten it with a knife and fork.

Upon inviting an Iranian delegation to the US, the Obama administration relied once again on the diplomatic dogs. There’s no word on how they went down, but Barry seemed to think that it was an essential part of the diplomatic process either way, noting:

“The hot dog, it seems, figures in American diplomacy only when absolutely needed. In 1999, for example, President Bill Clinton gathered at a table with Prime Minister Ehud Barak of Israel and the Palestinian leader Yasir Arafat to eat hot dogs. Kosher, of course.”