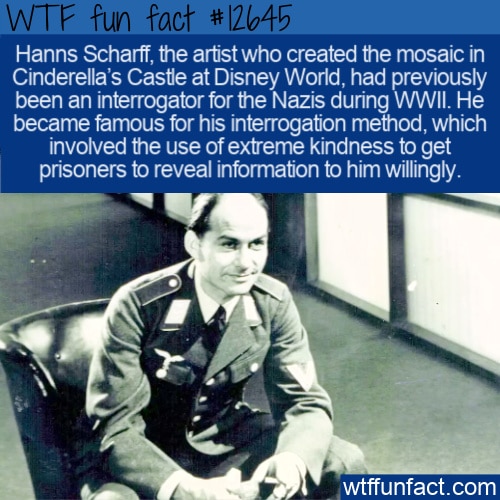 We don’t think of any interrogators as being friendly, much less those used by the Nazis during WWII. But Prussian-born Hanns Scharff became a master interrogator by using an overwhelmingly successful technique that involved using kindness to win the trust of the soldiers he was asked to get information from.

Scharff was due to be sent to the front lines, but shortly before it happened, the Nazis decided that he would be an asset in interrogation because he knew English. He interrogated over 500 prisoners during his service and only failed a couple of dozen times.

Scharff became known internationally, and because he wasn’t considered a war criminal, he wasn’t tried at Nuremberg. In fact, he was able to come to the US in 1948 instead if he agreed to interrogate and testify at the trial of the Air Force pilot Martin J. Monti, who defected to Germany in 1944 and became a Nazi propagandist.

Once in the US, Scharff even met up with some of the men he interrogated in German prisons!

Eventually, Scharff was able to return to his original career as an artist, and more specifically, a mosaic artist and furniture maker. His mosaics can be found in countless government buildings, hotels, colleges, and even Disney World. He created the mosaic at Cinderella’s castle as well as ramps into Epcot Center.

He died in 1992, but his “Scharff Technique” is still taught in the US military. – WTF fun facts