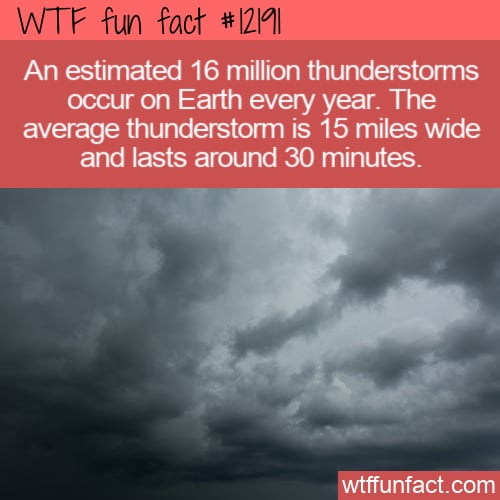 A thunderstorm is simply a rain shower during which you can hear thunder. They are the result of moisture being lifted from the ground and into the air via a phenomenon called convection.

According to NOAA (cited below): “Three basic ingredients are required for a thunderstorm to form: moisture, rising unstable air (air that keeps rising when given a nudge), and a lifting mechanism to provide the ‘nudge.’ The sun heats the surface of the earth, which warms the air above it. If this warm surface air is forced to rise—hills or mountains, or areas where warm/cold or wet/dry air bump together can cause rising motion—it will continue to rise as long as it weighs less and stays warmer than the air around it. As the air rises, it transfers heat from the surface of the earth to the upper levels of the atmosphere (the process of convection). The water vapor it contains begins to cool, releases the heat, condenses and forms a cloud. The cloud eventually grows upward into areas where the temperature is below freezing. As a storm rises into freezing air, different types of ice particles can be created from freezing liquid drops. The ice particles can grow by condensing vapor (like frost) and by collecting smaller liquid drops that haven’t frozen yet (a state called ‘supercooled’). When two ice particles collide, they usually bounce off each other, but one particle can rip off a little bit of ice from the other one and grab some electric charge. Lots of these collisions build up big regions of electric charges to cause a bolt of lightning, which creates the sound waves we hear as thunder.”

A thunderstorm usually starts without rain and does not need to contain lightning.

Each year, there are an estimated 16 million thunderstorms on the planet and 10,000 in the U.S. alone. However, only 10% of these reach the “severe” thunderstorm category in which wind, rain, and lightning can do damage.

While spring and summer are the most common time for thunderstorms, they can occur year-round.

Thunderstorms might seem innocent, but they can be deadly. NOAA notes that “Many hazardous weather events are associated with thunderstorms. Under the right conditions, rainfall from thunderstorms causes flash flooding, killing more people each year than hurricanes, tornadoes or lightning. Lightning is responsible for many fires around the world each year, and causes fatalities. Hail up to the size of softballs damages cars and windows, and kills livestock caught out in the open. Strong (up to more than 120 mph) straight-line winds associated with thunderstorms knock down trees, power lines and mobile homes. Tornadoes (with winds up to about 300 mph) can destroy all but the best-built man-made structures.” — WTF fun facts

1 thought on “WTF Fun Fact 12191 – The Prevalence of Thunderstorms”