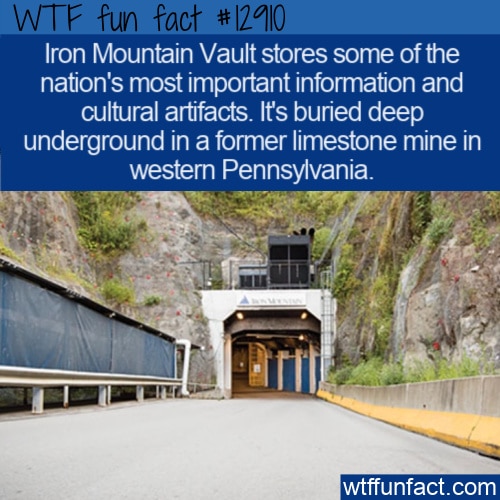 Not many people have heard of Iron Mountain – especially outside of western Pennsylvania. It’s probably better that way since no one is allowed near it. Iron Mountain is a vault holding some of the nation’s (and the world’s) most valuable documents and recordings.

What is Iron Mountain?

Iron Mountain Vault is a data storage facility buried deep underground in the hills of western Pennsylvania. The 1200-acre vault used to be a limestone mine, and you’d have a hard time finding it today even if you looked. They obviously don’t advertise or have big signs letting you know you’re there.

Oh, and there are guards to make sure people don’t get anywhere near it.

According to Penn Live:

“Miners created the cave by exploding 3,000 sticks of dynamite nightly over the course of five decades. They abandoned it in the 1950s when surfacing mining became a cheaper alternative to unearth the limestone.

Soon after, the mine was converted into a storage facility, storing paper records. In more recent years, it became a place to house data centers, including many of those belonging to government agencies and private companies.

The mine is like a small underground city. It has its own fire brigade with trained firefighters, security, streets, a speed limit (10 mph), traffic signs, street names, pedestrian walkways, and addresses assigned to its thousands of tenants that occupy its 16-foot-high corridors.”

What’s inside the Vault?

There’s plenty of mundane stuff (at least to most of us) in Iron Mountain. The facility’s owner simply rents out the space as well as takes on the temperature control and safety responsibilities.

The vault continues to grow, sprawling out with each new customer. Around 2,000 people work at the mine these days.

And what’s inside? Well, a lot – from the accounts of nearly every government student loan holder to master recordings of Ozzy Osbourne and Frank Sinatra. According to the Iron Mountain website, the facility stores “some of the world’s most valuable information.” They’re just not real specific about what it is.