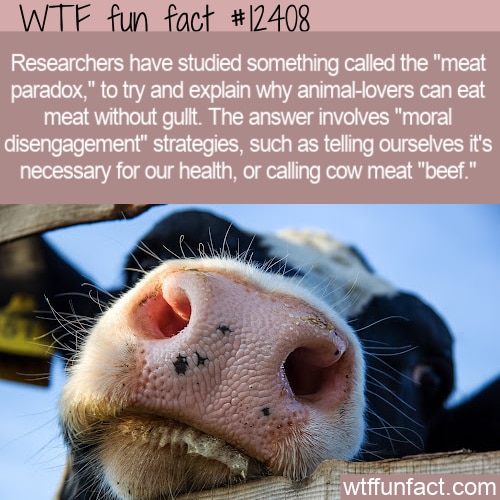 If you’re fully committed to eating meat regardless of what anyone tells you, you may not find this compelling. But the question of why so many of us continue to eat meat despite 1) loving animals and 2) knowing the environmental wreckage the meat industries cause to the planet is – at the very least – an interesting philosophical question. A so-called “Meat Paradox,” if you will.

Put aside your actual choice and your own defenses for a second and consider what a curious situation it really is. We’re not saying everyone should become vegetarians, but ethically speaking, it makes sense to do so if you’re an animal lover and/or concerned about the planet.

Not convinced about the planetary consequences? That’s ok; it’s rare to be taught about them, to begin with! Here’s a great set of facts from IFL Science, a website devoted to translating scientific research for the rest of us, without judgment:

“Raising livestock for meat, eggs, and milk accounts for roughly 14% of all man-made greenhouse gas emissions. Beef production is the biggest driver of forest loss within agriculture. The meat industry has been linked to a host of other environmental harms, including water pollution.

Eating too much meat can be bad for your health too, particularly red and processed meat which is thought to increase your risk of developing colorectal cancer. Feeding the world’s appetite for meat costs the lives of billions of animals a year, and animal welfare is a concern on farms worldwide, with pigs, cows, and chickens often subject to overcrowding, open wounds, and disease.”

People get all sorts of sensitive and defensive when it comes to their life choices (which we don’t care about one way or another). So remember that this is purely an ethical inquiry: If we love animals and care about the planet, how do so many of us eat meat without guilt?

The answer? Well, some of us do feel guilty or queasy about it, but it’s so ingrained in our culture that meat-eating is unproblematic that we just go for it. But for others, it requires a little trick of the brain that we don’t even realize is going on. It’s called “moral disengagement,” and it’s exactly what it sounds like. We have to disengage from thinking about the moral implications of what we’re doing. And we do it in many ways, including:

We’re sure you can think of others. And, you never know, maybe you’ll learn something interesting about yourself if you stop and think about how you eat meat without picturing the animals they once were.

Self-inquiry is a bit of a lost art, but no one said you had to tell anyone the answers in your brain. Just use them to learn about yourself! It’s kind of cool to assess how our brains work. – WTF Fun Facts

Source: “The Meat Paradox: How Your Brain Wrestles With The Ethics Of Eating Animals” — IFL Science