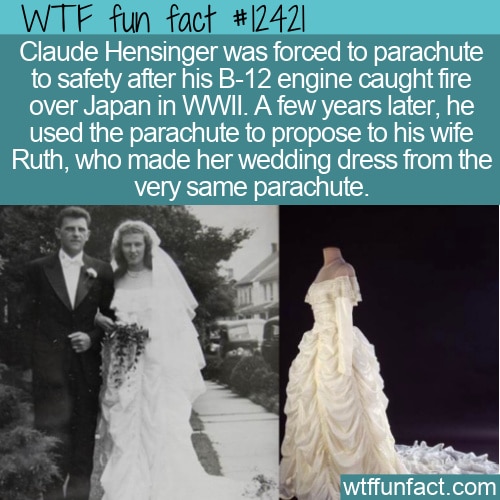 In 1944, an American B-29 pilot named Claude Hensinger had to parachute out of his aircraft after his engine caught fire over Japan. He made it safely to the ground in China and used the parachute to keep him warm that night until he was rescued the following day. He returned home safely, holding onto the device that saved his life.

Later that year, he met his future wife, Ruth, and they were engaged in 1947. Instead of a ring, Hensinger proposed with the parachute.

“This is the parachute that saved my life. I want you to make a wedding gown out of it,” Hensinger told his fiance.

The Smithsonian, which houses the dress (though it’s not on display), described the circumstances behind its creation:

“This wedding dress was made from a nylon parachute that saved the groom’s life during World War II. Maj. Claude Hensinger, a B-29 pilot, and his crew, were returning from a bombing raid over Yowata, Japan, in August 1944 when their engine caught fire. The crew was forced to bail out. It was night, and Major Hensinger landed on some rocks and suffered some minor injuries. During the night, he used the parachute both as a pillow and a blanket. In the morning, the crew was able to reassemble and were taken in by some friendly Chinese. He kept the parachute and used it as a way to propose to Ruth in 1947. He presented it to her and suggested she make a gown out of it for their wedding.”

At first, Ruth had no idea how to turn the giant parachute into a dress. But after walking by a store window and seeing a dress that resembled Scarlett O’Hara’s in Gone with the Wind (the one she made from curtains), it all came together. Ruth worked with a local seamstress to make a bodice and veil, and she used the parachute to make the skirt on her own.

According to the Smithsonian:

“She made the skirt herself; she pulled up the strings on the parachute so that the dress would be shorter in the front and have a train in the back. The couple were married in the Neffs Lutheran Church in Neffs, Pennslyvania, July 19, 1947. Their daughter and their son’s bride also wore the dress for their weddings.” – WTF Fun Facts