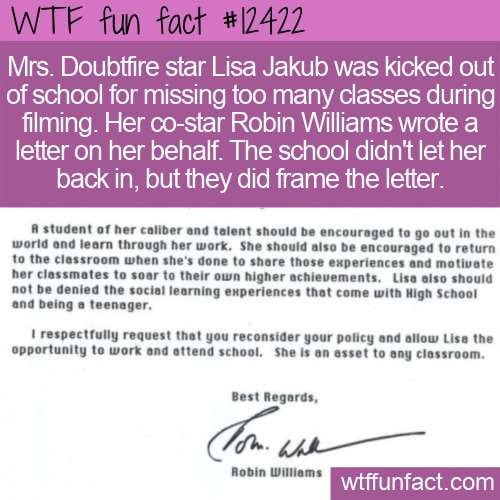 It’s no secret that the late comedian Robin Williams’ had a good heart. But fewer people know the stories that gave him that reputation – stories like Lisa Jakub’s.

In 1993, she was a young actress playing Williams’ daughter in the comedy Mrs. Doubtfire. As most of us know, child actors often get tutored on set since they miss a lot of school days. But Jakub was still enrolled in her Toronto-area school at the time. That is until she hit the absence threshold.

“I was upset and Robin asked me about it,” Jakub told TODAY.com months after Williams’ untimely death in 2014. “The next day he showed up at my trailer with a letter he’d written to the principal asking him to reconsider and let me come back to high school. In an industry where people are only in it for themselves, Robin was not like that. Robin had my back and that will always be precious to me.”

The letter read, in part:

“I have spent the past three months working on ‘Mrs. Doubtfire’ with Lisa Jakub. I found Lisa to be a bright, inquisitive and an eager to learn young lady. She is charming and a delight. … I respectfully request that you reconsider your policy and allow Lisa the opportunity to work and attend school. She is an asset to any classroom.”

Unfortunately, the letter impressed the school but did not change their decision. In fact, they framed the letter and hung it on the wall in their main office but did not allow Jakub back in.

The letter went viral on Reddit in 2015 and Jakub herself updated fans. Her message read:

“Hi there – just wanted to say thanks for sharing this, and maybe answer a few questions I’m seeing. I was being tutored on set for the required three hours a day and mailing back work to my school. However, my absence required that my teachers put together special work for me and my school wasn’t willing to do that. I had told them in advance that I would be away (I had been an actor since I was four, so this wasn’t really news) but during the long shoot it became too much of an issue for them. I don’t really blame them – it was very unusual, especially in the Canadian suburbs, in the early 90s. As for the legality of it all, I really don’t know. I was embarrassed and didn’t want to be somewhere I wasn’t wanted – so we didn’t fight it. I ended up attending a private school after that, for a short time. They also struggled with accommodating my strange work schedule. I was told that wasn’t a good fit, either. So, I never graduated from high school. When I was in my twenties, after I left LA and retired from acting, I got my GED. When I was thirty-one, I graduated from the University of Virginia. I still live in VA, and I’m a writer now. (I tell this whole story in my book, if you’re interested – You Look Like That Girl http://www.amazon.com/You-Look-Like-That-Girl/dp/0825307465 ) So, it all turned out ok in the end! But of course the point of all of this is really that Robin was a spectacular individual, who took the time to fight for a kid going through a personal problem. And I’m just glad that people are hearing that story – because that’s who he truly was. That’s how I like to remember him.”