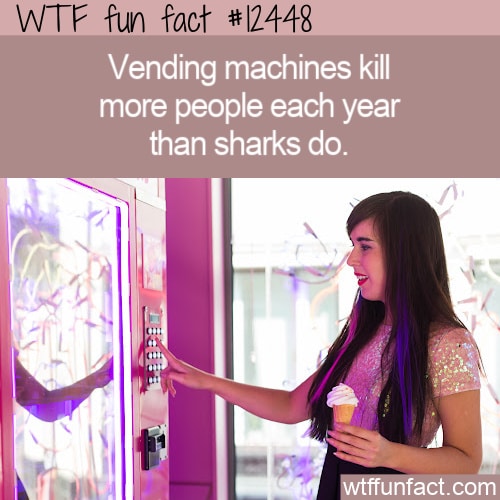 No, it’s not because the snacks you find in vending machines are high-calorie pseudo-food. We mean vending machines themselves can kill. Of course, your chance of encountering either may have gone down during the pandemic, but statistically speaking, you’re more likely to be killed by a vending machine than a great, big, toothy, man-eating shark.

Shark attacks make the news. Sharks seem dangerous. We’re afraid of sharks. They’ve made movies about how scary sharks are. They had to dedicate a whole week to sharks to show off both their deadliness and majesty. You just can’t say the same thing about vending machines. So sharks live in our imagination as something deadly.

Vending machines, on the other hand, are our friends. If the machines take over, we want them to be the ones that dispense snacks, right?

Ok, this isn’t really about ways you’re likely to die. But think about it – don’t we engage in this reasoning quite a lot? We love it. We throw it around all the time. “I can do X because Y is more dangerous.” That’s actually some deeply faulted reasoning since it ignored just HOW deadly X is (which, in this case, is vending machines).

Vending machines aren’t deadly at all. But they sure sound that way when you compare them to sharks.

And sharks? They get our attention as something deadly, even though, statistically, they aren’t. Especially if you live in, say, Indiana.

Now, we’re not going to insult you by spelling out the obvious social implications here, but let’s just say that next time you want to throw around statistics to prove a point, you might want to make sure they’re helpful. – WTF fun facts

Source: “How Are Sharks Less Dangerous than Vending Machines? An Exercise in Conditional Risk” — Freakonomics