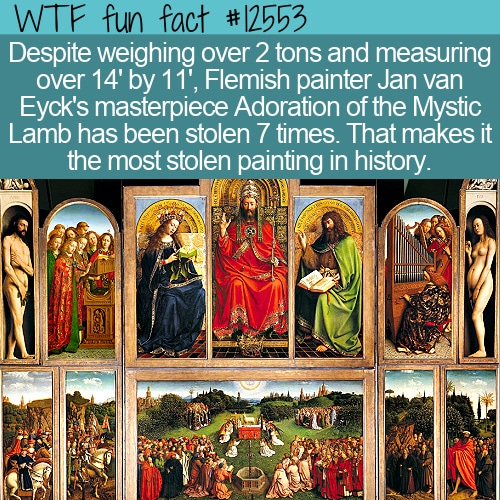 It may be one of the most important paintings in Western history, ushering in the era known as the Renaissance, but Jan van Eyck’s masterpiece Adoration of the Mystic Lamb also has a more dubious honor. It’s the world’s most stolen painting.

Perhaps the most impressive part is that the altarpiece weighs over 2 tons – that’s 4000 pounds! That’s more than a rhinoceros (albeit less aggressive). It also measures 14.5 by 11.5 feet.

Also known as the Ghent Altarpiece, Adoration of the Mystic Lamb has 12 panels depicting everything from the Annunciation, Adam and Eve, the Virgin Mary, John the Baptist, and Jesus himself. But the central theme is an incredibly detailed rendering of pilgrims gathered to honor the Lamb of God.

In 2010, Noah Charney, who authored the book Stealing the Mystic Lamb: the True Story of the World’s Most Coveted Masterpiece, explained the painting’s importance to NPR:

The altarpiece was initially designed to go in the cathedral of St. Bavo in Ghent. And that’s where it stayed for a century.

But in 1566, Calvinist militants set out to destroy the piece. When Catholic guards discovered the plot, they disassembled it and hid it in the cathedral tower. It survived the planned attack, but in 1794 four panels were stolen during the Napoleonic Wars and put on display in the Louvre.

After Napoleon’s defeat in 1815 at the Battle of Waterloo, France sent the painting back to Ghent. But in 1816, a vicar at the cathedral reportedly stole the wing panels, which eventually ended up in the Berlin museum. But in 1919, one condition in the Treaty of Versailles was returning those panels to Ghent.

In 1934, thieves broke into the cathedral and stole the lower-left panel, which has still not been recovered. What’s on display in Ghent currently is a copy of that panel.

Unsurprisingly, the Nazis (known to pilfer priceless art) stole the painting during WWII as it was being transported to the Vatican. They were convinced it held a clue to a mystical treasure map that would help them find the relics of Christ’s passion. Yet it ended up stored away in an Austrian salt mine. The mine was rigged with explosives, but the Allies managed to take the mine, dismantle the bombs, and save all the priceless works of art hidden inside.

More intrigue surrounds the painting, and there were many more attempts to steal it. But today, it’s back in Ghent (though one panel – Righteous Judges – is still a replica since it’s never been located) and on display. –  WTF fun fact

Source: “The Most Stolen Work of Art” — Encyclopedia Britannica