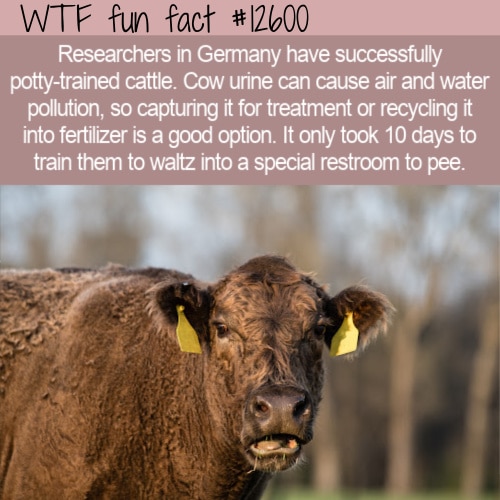 Did you know that cattle can be potty trained with less instruction than toddlers? Some say it’s “easier” or “faster,” but that’s really going to depend on your access to and familiarity with each. Still, we didn’t realize cows would have the inclination to do it at all!

Researchers and cattle ranchers have worked together in Germany to train cattle not to pee out in the open. And it’s not a matter of cleanliness; it’s a matter of survival. OUR survival.

There are around 1 billion cattle in the world. Each pees about 10 liters (or 5 gallons) a day. It’s a lot. But we all pee, so what’s the problem?

Well, there are a couple of issues here:
1. When cows release all that urine in barns, it mixes with poop on the floor and creates ammonia, leading to air pollution for nearby people.
2. When they pee in pastures, it leeches into local waterways. And while most places are equipped with treatment facilities, not all of that infrastructure is in great shape and can be overwhelmed by the sheer amount of potential pollutants in the water.
3. Cow urine also contains nitrous oxide. This substance gets trapped in the earth’s atmosphere and can prevent heat from escaping into space, increasing our planet’s average temperature.

So, if we can prevent all this, why wouldn’t we? And we can’t stop cows from peeing, so scientists want to see if they can capture the urine in a way that allows them to control it so that it causes less harm.

Potty training cows sounds ridiculous, but so does letting them pollute our atmosphere while we do nothing. (And let’s face it, we’re not getting rid of cows any time soon.)

Of course, they had to call it “MooLoo training,” so some of this remains pretty silly. The experiment also involved a “cow psychologist,” which is not something we ever heard about at career day.

Ok, so what does cow potty training actually look like? It’s not quite as bizarre as it sounds. It’s just a special pen with astroturf that cows can be trained to pee in. The floor is created in a way that allows the urine to be captured underneath. And some of it can even be used to make fertilizer.

Cows are pretty smart, but they’re also encouraged by food – so it didn’t take them long to realize they got a snack after using the “restroom,” making it much easier to train them.

The first experiment involved 16 cattle and the researchers had 11 of them trained after about 10 days.

Now that we know “MooLoo training” works, the goal will be to automate it so it can be adopted by farmers with much larger herds.

If you’re really eager to see a cow use the bathroom, there’s a video below!