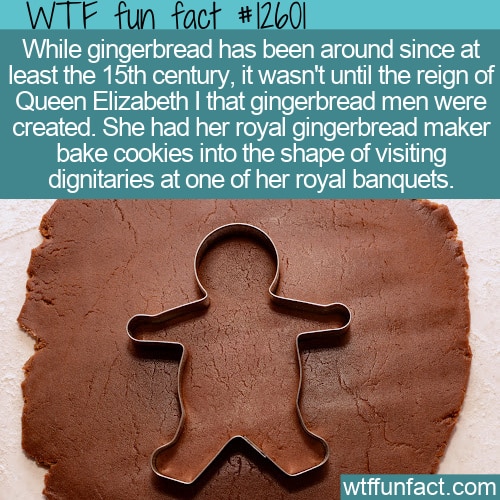 People ate well in the court of Queen Elizabeth I, who reigned in the late 16th and early 17th centuries. Ok, it was British food, but the desserts were good.

Decadent royal banquets were stocked with sweets like marzipan and shaped into elaborate designs of castles, animals, and even other foods. The queen also had a personal gingerbread maker.

At one of these events, she had this gingerbread maker bake cookies to resemble the foreign dignitaries she had invited. Prof. Carole Levin, an expert on Queen Elizabeth I’s court surmised that in a time of political turmoil, the amusing gesture may have even been a part of diplomacy. (We just hope the cookies were flattering and the people they resembled had a sense of humor because it’s easy for those sorts of things to backfire.)

While we don’t know which came first, around the same time, there was another, very different use of gingerbread “men.” Folk doctors (which were more along the lines of what we might think of as witches) would “prescribe” them to women looking for love. According to Levin, the woman would buy the cookie and attempt to get the man she had her eye on to eat it. They were believed to be imbued with magic that would make the man fall in love with the cookie-giver.

We’re not sure how often it worked, but it’s not NOT true that the way to some men’s hearts is through their stomachs.

The delicious-smelling cake had been around for centuries before all of this, but baking them into the shape of little people is a culinary curiosity that traces back to a specific time and place. – WTF fun facts