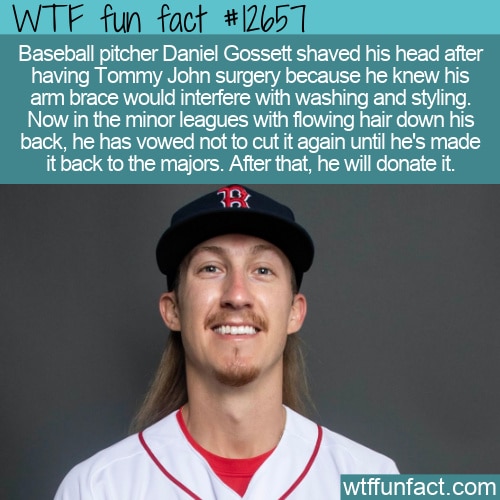 On August 1, 2018, pitcher Daniel Gossett of the Oakland A’s shaved his head following Tommy John surgery. The recovery after this kind of surgery is very lengthy, and Gossett knew his arm would be immobile for a while.

“I was in an arm brace for however many weeks,” Gossett told MassLive. “I was like, ‘Man, I can’t do anything with this hair.’ So I cut it all off.”

However, as baseball players (especially pitchers) are known for their rituals and superstitions, Gossett has decided not to cut it again. At least not for a while.

He was released by the A’s in 2020, but seeing his promise, another team snatched him up. In 2021, he was signed by the Boston Red Sox and played in their minor league system. Pitchers have to work their way back up to the major league teams.

It was at that time that Gossett made the decision not to cut his hair until he was back on a major league team – no matter how long it took.

And it’s taking a while!

The Red Sox released him as well (at the end of 2021). But he didn’t spend long as a free agent. In 2022, the Minnesota Twins signed him to their minor league team.

Now, we’ll have to wait and see how long it takes for him to work his way up, but his hair is still growing – many inches down his back, in fact.

Luckily, it’s healthy, beautiful blond hair and he’s promised to donate it when the time comes.