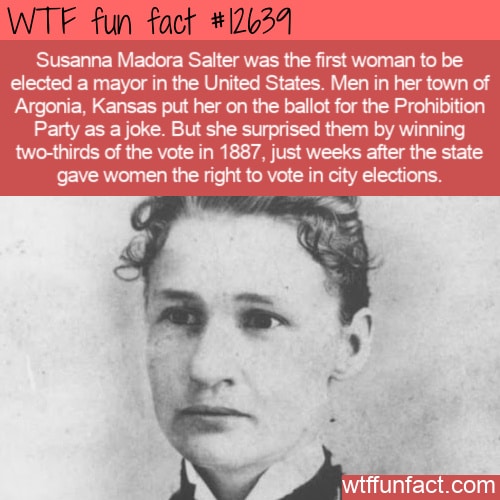 America’s first woman mayor was put on the ballet by the men in Argonia, Kansas to run for the Prohibition Party.

Susanna Kinsey’s family came to Kansas from Kentucky. There, she met her husband Lewis Salter while attending the Kansas State Agricultural College. The couple moved to Argonia where they raised a family and Susanna became an officer in the local Woman’s Christian Temperance Union.

As a joke, the men in her town added her name to the ballot in 1887 for mayor and probably regretted their decision when she surprised them by winning 2/3 of the vote. They may have thought the joke was clever, but they were not. Women had earned the right to vote in city elections that very same year.

The other thing Argonia men failed to realize about Salter was that at 27, she actually had a lot of knowledge about politics. She was the daughter of the town’s very first mayor and the daughter-in-law of Kansas’ former lieutenant governor.