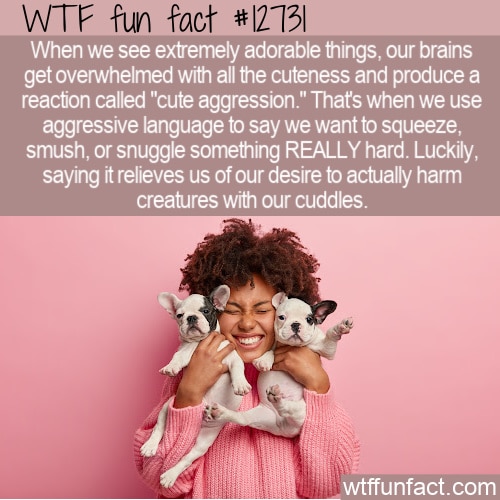 Have you ever seen a chubby baby face or a fluffy bunny and thought about snuggling it to pieces? It’s called “cute aggression,” and it isn’t typically as violent as it sounds.

According to Forbes, “cute aggression” was first described by Yale researchers in 2015. It’s “actually pretty common and can encompass behaviors such as wanting to bite, nibble, squeeze, or smoosh the face of something extremely adorable.” In addition, “studies have long shown that people who view photos of tiny, adorable things often react with extremely aggressive language.”

Don’t worry – no one gets hurt

The good news is that no matter how many times we say “I just want to smush her cheeks” or “I want to cuddle that kitten SO HARD,” those words don’t actually translate into action. For the most part, we lay off the smushing and potentially painful cuddles. (Of course, toddlers and cats may not agree – they always act like a snuggle is about to kill them.)

Research into “cute aggression” was done by Katherine Stavropoulos, an assistant professor at the University of California, Riverside. She’s also a licensed clinical psychologist and neuroscientist. Stavropoulos looked at the brain’s electrical activity as subjects viewed images of really cute creatures. She published the findings in an article titled “‘It’s so Cute I Could Crush It!’: Understanding Neural Mechanisms of Cute Aggression,” in Frontiers in Behavioral Neuroscience.

Forbes states that “the new study backs up the hypothesis that these feelings may serve as a mechanism to prevent people from being overwhelmed (and thus incapacitated) by cute things. It’s basically what happens to your brain when you just can’t even.”

“Cute aggression” is all in your head

In other words, the electrical activity in our brains showed that we have a physiological reaction to cuteness. And it can be A LOT. In order to make sure we don’t actually smother baby animals (which were deemed to be the cutest things overall, producing the biggest neurological response), we use “violent” language to talk about snuggling things really hard.

That’s just how our brains respond to a cuteness overload.

Forbes also revealed that “Journalists have noted that this phenomenon is universal and that most languages have a word for this type of feeling – the Filipino language Tagalog, for example, has a word Gigil, which means gritting your teeth and trembling in an overwhelming situation.” In addition “Other studies have shown that cuteness aggression is felt far more acutely when people can’t physically touch the cute thing they’re seeing.”

That would help explain all the squealing when we see cute animal videos online. – WTF fun facts

Source: “The Science Behind Why You Want To Destroy Something Beautiful” — Forbes