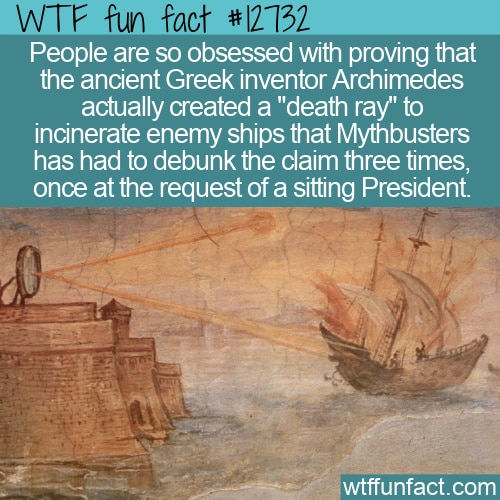 There’s a great New York Times article from 2003 that begins with the line “For the last time: Archimedes did not invent a death ray.”

Of course, it disappointed a lot of people. The reason someone had to say it was that the obsession with this particular invention had to be debunked so many times that even President Obama got involved and called on Mythbusters (who debunked it a third and final time on their show alone). Alas, people still believe it existed (presumably just because they think it sounds really cool and don’t care much for evidence).

Archimedes did invent a number of very wacky weapons though – we just have little to no evidence that most of them were ever used. Take the “claw of Archimedes,” for example. The ancient Greek inventor did come up with an idea to build a giant claw that would work like a crane to reach out into the sea and “grab” enemy ships to destroy them.

But while there are ancient accounts describing it (and even Wikipedia and some engineers and a handful of ancient historians might have you believe it was used), there isn’t so much as a single drawing or scrap of wood that would prove it was ever really built. There are, however, written accounts. It’s just that no one can be sure they aren’t recalling tall tales told during times of jubilant victory. But, hey, maybe underwater archaeologists will find one. It’s not entirely impossible.

So, about this death ray. The invention was basically a series of mirrors that would use the sun to point a ray of searing sunlight at enemy ships in order to incinerate and sink them as they launched an amphibious assault. It would work a bit like using a magnifying glass to burn an ant but on a very large level. We’ll admit, it does sound cool, but again, there would be a lot of evidence if someone had managed to construct something like that.

If you want to know why people remain obsessed with the “death ray” (which is not a name Archimedes used), blame some 12th-century historians and MIT students.

However, according to Sciencing: “Twelfth-century historians John Tzetzes and John Zonares credit Archimedes with using a system of mirrors to direct the heat of the sun at Roman ships, setting them ablaze. Zonares goes so far as to claim that Archimedes destroyed the Roman fleet this way. Many modern historians and scientists consider these claims dubious. However, a team of Massachusetts Institute of Technology engineering students were successful in replicating the feat of setting a ship ablaze using only mirrors in a 2005 set test, lending plausibility to the legend that Archimedes invented a death ray using mirrors.”

Aspiring historian Spencer McDaniel has also convincingly debunked the myth using writing sources, noting that: “The Greek historian Polybios of Megalopolis (lived c. 200 – c. 118 BC), the Roman historian Titus Livius (lived 64 or 59 BC – AD 12 or 17), and the Greek biographer Ploutarchos of Chaironeia (lived c. 46 – c. 120 AD) all give detailed accounts of the Roman siege of Syracuse and not one of them ever mentions anything about Archimedes having built a death ray to defend the city.”