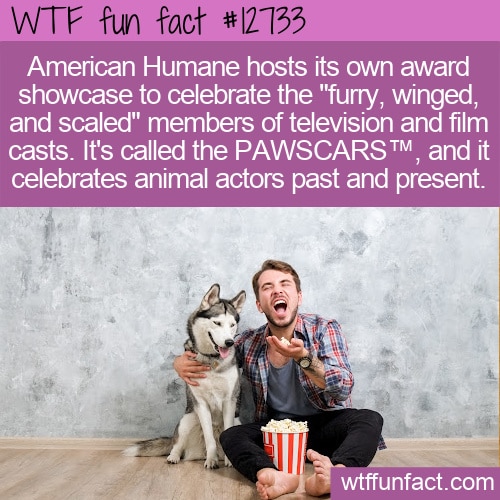 Each year, American Humane puts on its own award show to celebrate the “furry, winged, and scaled” members of television and film casts. It’s called the PAWSCARS™, and it celebrates animal actors past and present.

American Humane has long played a role in ensuring the health and safety of animals on entertainment sets. According to their website:

Their Hollywood initiative also includes the annual award show, which we really think should be televised since we would totally watch that (and we’re sure other animal lovers would too!).

Interestingly, the ASPCA also has Pawscers Awards, but these go to adoptable animals throughout the country, not to animal actors.

American Humane’s PAWSCER awards got the most press in 2016, when fans voted on their all-time favorite animal movies. The winners included

Favorite Animal Buddy Movie of All Time: “Turner and Hooch”

Frankly, we want to know what people were thinking when they chose Old Yeller, which has a pretty devastating ending and scarred generations of children. But to each their own – the people have spoken.

American Humane’s explanation was that “Disney’s timeless classic from 1957 is credited as one of the first films to demonstrate the importance of the human-animal bond, the inextricable link between people, pets and the world we share.”

Overall, the PAWSCERS are designed to honor “some of America’s most treasured institutions.” And while we haven’t heard much about the awards in the last few years, we think it’s time to add more animal award shows to the television line up!