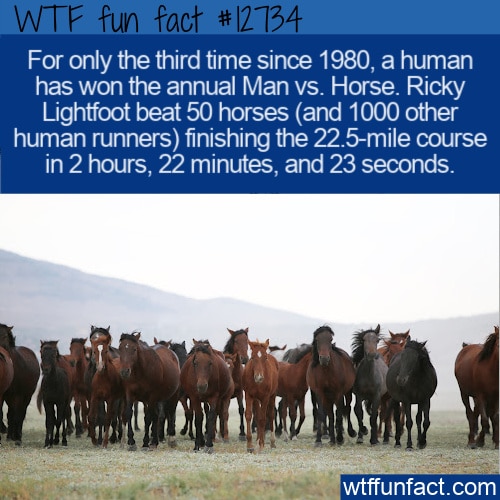 For only the third time since 1980, a human has won the annual Man vs. Horse race. Ricky Lightfoot beat 50 horses (and 1000 other human runners) finishing the 22.5-mile course in 2 hours, 22 minutes, and 23 seconds. He won about $4200 for his efforts – as well as bragging rights amongst friends and foals alike.

IFL Science humorously recounted the beginning of the Man vs. Horse race:

“The idea for the race came, as you might expect, from a drunken argument in a pub. Landlord of the Neuadd Arms in Llanwrtyd Wells, Wales, overheard two customers arguing (as you do) over the benefits of people vs the benefits of horses.

After a few more pints, as was inevitable, one of the men proclaimed that over a long distance people could equal the performance of any horse. Not satisfied with mere speculation, the landlord – Gordon Green – decided that there should be a public competition where this slurred theory could be tested. Every year since then – bar a few years where the event was canceled due to the pandemic – people have raced against horses in a constant battle for supremacy.”

Even more striking is the BBC report that “The winner of the grueling Man v Horse race has revealed he had been awake for 29 hours before the event after flying from Tenerife to claim victory…Landing at 04:00 he travelled to Wales, arriving at Llanwrtyd Wells, Powys, at 09:00 for the race start at 11:00. Crossing the line, the 6ft 4in athlete had no idea whether he had won as the people and animals take slightly different routes.”

The 37-year-old firefighter and father of 2 beat the first horse by over 2 minutes. So much for horsepower.

Prior to the race, Lightfoot said he didn’t have much experience around horses.

“I’ve never rode a horse in my life. I once rode a donkey at Blackpool Pleasure Beach though,” he told the BBC.

After winning, Lightfoot headed right back home to Cumbria to report to work at 7:30 am the next day. – WTF fun facts