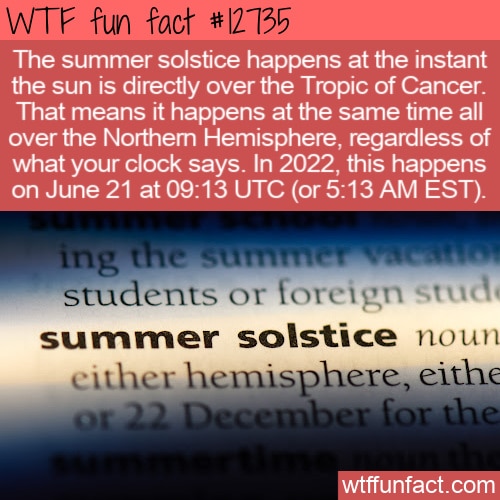 The Summer Solstice happens at the instant the sun is directly over the Tropic of Cancer. That means it doesn’t really matter what your clock says – it can happen long before the sun even rises in your area.

While June 21st is usually the day people remember and mark on their calendars as the solstice, it can actually happen on the 20th or 22nd. But the latter is rare. In fact, the last June 22 solstice in UTC time was in 1975 and it won’t happen again on the 22nd until 2203. So, sorry if you missed it.

The word “solstice” actually comes from the Latin words sol and sistere. If you’re thinking that means soul sister, you’re wrong, but we were kind of hoping the same thing. It actually means sun and standing still, which makes a lot more sense.

North and South, Summer and Winter

Of course, lands south of the equator are welcoming winter. June 21st is their Winter Solstice. So, if you’re a fan of cooler weather (and are one of the millions experiencing a heat wave today, you can always celebrate in solidarity with your friends in Australia).

In the Northern Hemisphere, the Summer Solstice is the longest day of the year in terms of sunlight, while in the Southern Hemisphere it’s the shortest day. That’s because at the precise time of the solstice the earth is tilted either the minimum or maximum towards or away from the sun. In summer, you’ll see the sun stay at its noontime elevation for what seems to be a bit longer than usual, and that effect will last a few days. However, the earliest sunrise and the longest sunset take place a few days before and after June 21st.

There are two other interesting things to note here. The tilt of the Earth doesn’t really change, it’s the rotation of the Earth that changes and points our already tilted planet’s Northern Hemisphere towards the sun. And Summer Solstice is actually the time of year when the Earth is farthest away from the sun (or on its aphelion). So, it’s not really the distance that matters. It’s all about how the planet is positioned.

For those ready to jump on the whole Earth axis thing, please note that in our lifetimes (and those of everyone we’ll ever know or remember), the tilt of the Earth will be the same. Technically, the tilt of the planet does vary between 22.1 and 24.5 degrees, but this cycle takes about 40,000 years.

People around the world celebrate solstice or “midsummer” in many different ways, but most include festive meals, traditional songs, bonfires, or reconnecting with nature in some way. In England, the so-called modern-day Druids (and tourists) like to hang out at Stonehenge to see the stones align perfectly with the sun. In Sweden, families raise the maypole for traditional dances and music. – WTF fun facts