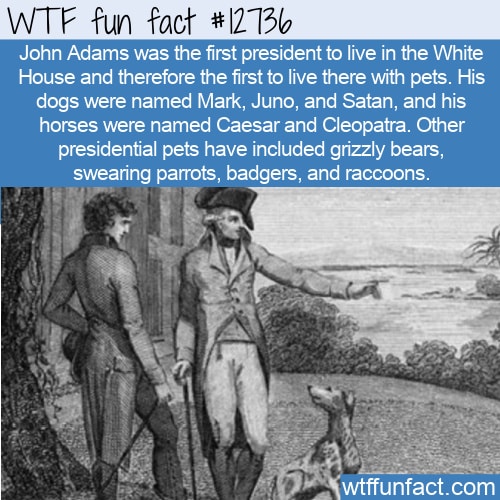 Presidential pets have their own history museum. And it’s totally worth exploring (even online) since there have been some interesting animals with interesting names living on those grounds.

John and Abigail Adams had some of the most interesting pet names – but the reasons behind those names are unknown. For example, they had two dogs – Juno and Satan – and a horse named Cleopatra.

They were definitely dog people through and through. According to the Presidential Pet Museum, Abigail Adams was especially fond of June, writing to her granddaughter: “If you love me … you must love my dog.”

We’re not so sure how they felt about Satan, but the name says a lot.

The most popular presidential pet is a dog, owned by 30 of the 45 presidents. But there have also been pet raccoons, former circus ponies, billy goats, and more. There has even been a famous presidential cow named Pauline, who was often covered in the press.

But if you really want to know about the weirdest pet moments in presidential history, behold:

– President Martin Van Buren tried to keep a pair of tiger cubs given to him by the Sultan of Oman. But Congress made him send them to the zoo.

– President Andrew Jackson had a parrot named Poll, who was taught to swear.

– John Quincy Adams (not to be confused with John Adams) kept an alligator given to him by the Marquis de Lafayette in an unfinished bathroom. AND he let guests try to use that bathroom! (Ok, some have tried to debunk this, so it’s up to you whether or not to trust the official Presidential Pet Museum or not.)

– There were two more alligators who visited the White House during Herbert Hoover’s presidency in the early 1930s. His son Allan owned the animals and would often bring them by.

– Thomas Jefferson was gifted with two grizzly bear cubs who were caged on the front lawn for public viewing before finding a new home when they grew too big.

So, while there’s been much hoopla in the press over President Biden’s shelter dog Major being a bit of a menace to the Secret Service, he was certainly not the most dangerous presidential pet!

Source: “An alligator, tiger cubs, and a dog named Satan — these are the weirdest presidential pets in history” — Business Insider