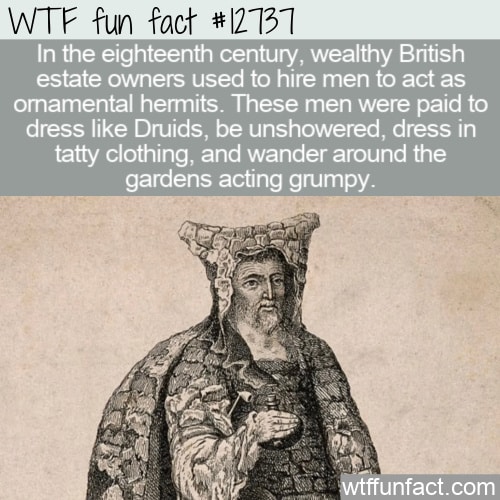 We know about garden gnomes, but what about ornamental hermits? They weren’t made of concrete or resin – they were real people.

In the 18th century, wealthy people with gardens didn’t want to be tacky, so no garden gnomes would do. The fancy way to decorate your garden was with an actual person paid to dress like a Druid, skip the showers, dress in tatty clothing, and wander around the estates.

This was mostly a practice in England, but there were ornamental hermits in Ireland and Scotland as well.

Atlas Obscura took a look at a book written about these interesting professionals by Gordon Campbell, a Professor of Renaissance Studies at the University of Leicester. In a video explaining his monograph, titled The Hermit in the Garden: From Imperial Rome to Ornamental Gnome, he noted:

“Recruiting a hermit wasn’t always easy. Sometimes they were agricultural workers, and they were dressed in a costume, often in a druid’s costume. There was no agreement on how druids dressed, but in some cases they wore what we would call a dunce’s cap. It’s a most peculiar phenomenon, and understanding it is one of the reasons why I have written this book.”

In his book, Campbell mentions an ad from Sir William Gell’s A Tour in the Lakes Made in 1797, in which he states that ”the hermit is never to leave the place, or hold conversation with anyone for seven years during which he is neither to wash himself or cleanse himself in any way whatever, but is to let his hair and nails both on hands and feet, grow as long as nature will permit them.”

Apparently, the ornamental hermit can be traced all the way back to the Roman emperor Hadrian. His villa at Tivoli had a small lake with a one-person structure for hermiting oneself away from the world (which, we imagine, would be a nice thing for an emperor to do every now and them). Pope Pius IV may have also built one for himself.

But the structures built for ornamental hermits were mostly for show and not necessarily for spiritual reflection.

How to be a hermit

The hermits were also instructed to be rather dour in order to be authentic. No shoes, no guests, and no smiling.

Atlas Obscura found a 1784 guide to the Hawkstone estate in Shropshire describing how to care for your ornamental hermit:

“You pull a bell, and gain admittance. The hermit is generally in a sitting posture, with a table before him, on which is a skull, the emblem of mortality, an hour-glass, a book and a pair of spectacles. The venerable bare-footed Father, whose name is Francis (if awake) always rises up at the approach of strangers. He seems about 90 years of age, yet has all his sense to admiration. He is tolerably conversant, and far from being unpolite.”

We can’t decide if it sounds like a dream job or a really depressing life.

Source: “Before the Garden Gnome, the Ornamental Hermit: A Real Person Paid to Dress like a Druid” — Atlas Obscura