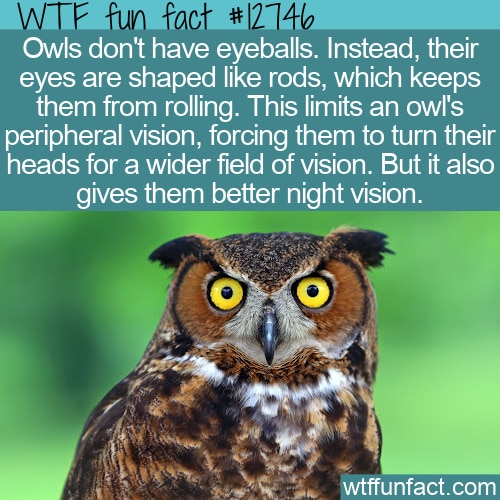 Owls have eyes, of course. But owls don’t have eyeballs.

Instead, owls have eyes shaped like cylinders (with three eyelids!). Because of this shape, owls can’t roll their eyes around while keeping their heads still. That’s why they have to move their heads around too much to look around.

How do owls see without eyeballs?

According to the Office of Science & Society at McGill University: “Since moving their torsos would likely make noise that would alert their prey to their presence, owls have evolved to have necks that can spin up to 270° essentially silently.”

But why would an owl evolve to have eye rods instead of eyeballs? Wouldn’t it just be easier not to have to move your head at all in order to see to the side?

Well, perhaps, but the benefit of having eyes shaped like rods instead of balls is that not only does it allow them to see better in the dark but it’s the optimal shape for an animal with such a small skull.

The benefit of eye rods

As you may have noticed, nocturnal animals tend to have large corneas. That’s so any light can be collected more efficiently, allowing them to see in the dark.

As it turns out, these elongated eye tubes make it even easier for them to see the way they need to, even if they do have to make more movement in order to get a larger field of vision (also called binocular vision). Without moving their heads, their visual field is about 110 degrees (a human’s is 180 degrees, for comparison).

Binocular vision also lets owls see objects in three dimensions (height, width, and depth). So, it turns out an owl’s eyes are pretty perfectly suited to its lifestyle.

While some believe all of this means that owls can’t see during the day because they’re blinded by too much light, that’s simply not true. Some owls can see even better than humans in the daylight as well, despite the lack of eyeballs.

At least you never have to worry about an owl giving you the side-eye. – WTF fun facts