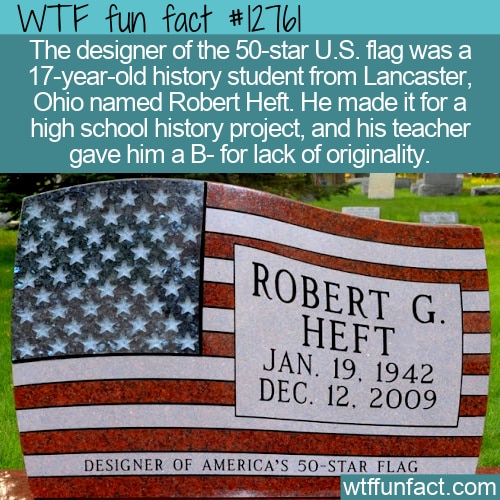 Our current American flag was designed by teenager Robert Heft in 1958. This fact may give you a bit of pause for two reasons.

Who designed the American flag?

But if you want to get technical, then The designer of the 50-star U.S. flag was a 17-year-old history student from Lancaster, Ohio named Robert Heft. He made it for a high school history project, and his teacher gave him a B- for lack of originality.

How did a teenager design the current American flag?

The second thing that might give you pause is that when Heft made his design, Hawaii and Alaska were not yet part of the United States. They didn’t even become part of the country at the same time.

Heft sewed on two more stars with the assumption that two more states would join. He used his parents then-current 48-star flag and his mother’s sewing machine.

According to the Ohio History Central (cited below), Heft’s history teacher “Stanley Pratt gave Heft a B- as the grade for the flag. Pratt supposedly stated that Heft’s design lacked originality, but the teacher did offer to raise the grade if Heft could get the flag accepted as the United States’ national flag. Heft sent his flag to Walter Moeller, his Ohio Congressman. Moeller succeeded in having Heft’s design adopted as the new United States flag on July 4, 1960.

Heft’s original flag has flown over the White House, every state capital building, and eighty-eight United States embassies. It remains in Heft’s possession, although numerous people and museums have offered to purchase the flag, including one offer of $350,000. Heft’s design was the twenty-seventh official flag of the United States.”