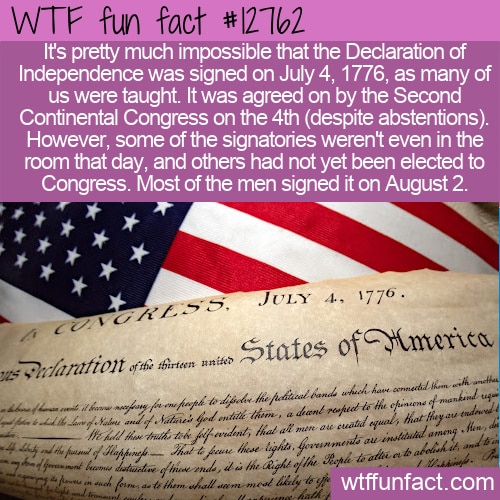 When was the signing of the Declaration of Independence? Well, it’s far more likely that the document was signed on August 2, 1776, and not on July 4th as most of us are taught.

At the very least, August 2nd is when the signatures were done being added (though we’re also pretty sure the last one was added in 1777).

So, when was the Declaration of Independence’s signed?

The delegates to the Second Continental Congress voted to approve the Declaration of Independence on July 4, 1776. Out of the 13 colonies, 12 voted to approve, with only New York abstaining since its delegates had not yet received official permission from Albany yet. That’s because like much legislation, compromises were still being made until the last minute (around 86 changes to Thomas Jefferson’s original draft).

The document stated that the signatories would no longer be colonies of the Kingdom of Great Britain and would not be “free and independent States.” It’s likely that at this point, the secretary of the Continental Congress had his assistant create a copy to be printed, and then had it delivered to the Pennsylvania State House in Philadelphia (now known as Independence Hall) on August 2, 1776, where it was then signed (or the signatures were completed) by members of all the colonies.

(However, there is evidence that Thomas McKean didn’t have a chance to sign the document until after January 1777.)

No one is exactly sure when the first signatures were added. But while Thomas Jefferson, Benjamin Franklin, and John Adams have all implied or stated that it was signed by Congress on July 4, 1776, the same day it was adopted, it appears that not even all the signatories were on site that day. That’s stated clearly by one of the signatories themselves. And to top it off, some of the signers hadn’t even been elected to the Congress by July 4th.

So, when was the Declaration of Independence signed? Maybe some people signed it on the 4th. But it’s far more likely that the final document was signed on August 2nd (and possibly done collecting signatures the following year).

Of course, this makes no real difference in the grand scheme of things. Independence Day celebrated the spirit of the document, which was largely in order and agreed to on July 4th.

But we do know one thing for certain about the Declaration of Independence – there is no treasure map on the back. – WTF fun facts