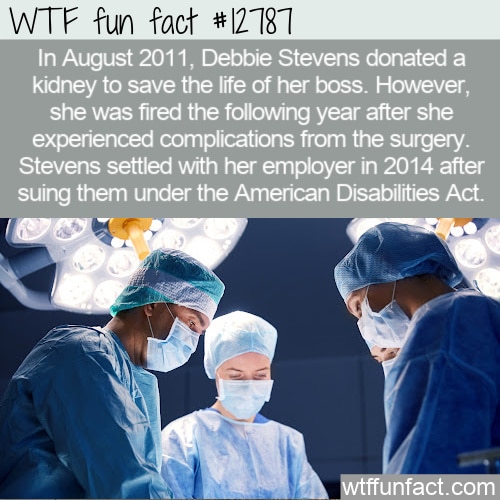 Debbie Stevens’ kidney donation didn’t end in the most heartwarming way. However, many of the memes about her story you may see online don’t tell the whole story.

Snopes (cited below) scoped out the whole story and found that shortened versions of the story are “mostly true,” however. She did donate a kidney to save her boss, and she was fired afterward.

It all started when the Long Island Atlantic Automotive Group employee heard her boss, Jacqueline Brucia, was unwell in October 2010. The two had a conversation about it and Stevens offered Brucia her kidney, to which she allegedly replied “you never know, I may have to take you up on that offer one day.”

In January 2011, Brucia followed up on the offer. However, the pair was not a match. Stevens didn’t donate her kidney directly to her boss, but she is the reason her boss found a match. As Snopes explains: “she agreed to donate it to a stranger in St. Louis, Missouri, setting up a transplant chain that enabled Brucia to receive a better-matched kidney from a donor in San Francisco.”

Stevens’ surgery took place on Aug. 10, 2011, and resulted in complications that made it difficult for her to return to her old job and perform all of the tasks she once did, such as lifting heavy objects.

According to Snopes’ investigation of the lawsuit and settlement: “When she returned to work in September (under pressure from Brucia, she alleged) she was treated curtly by Brucia, who allegedly refused to provide accommodations for these and other medical issues. Brucia is alleged to have ignored, for example, a doctor’s order that she not lift heavy objects, and she required Stevens to get permission before using the restroom. Allegedly in response to complaints Stevens made regarding harassment from Brucia, the company’s management transferred her to another dealership, where she was, her lawyer argued, similarly denied accommodations and put in a position for which she was less qualified. Atlantic Automotive Group fired Stevens for ‘performance issues’ just a few weeks after her lawyer sent a complaint to the company in March 2012. Following several depositions and rounds of discovery, both parties agreed to settle on Sept. 30, 2014.”

While we will never know the real reason Stevens was fired, she did have enough of a case to sue her employer under the federal American Disabilities Act (ADA).

But, in the end, they settled, and Atlantic Automotive Group did not have to publicly address the reasons behind the termination. They did, however, have to pay up. – WTF fun facts

Source: “Did a Woman Get Fired After Donating a Kidney on Her Boss’ Behalf?” — Snopes