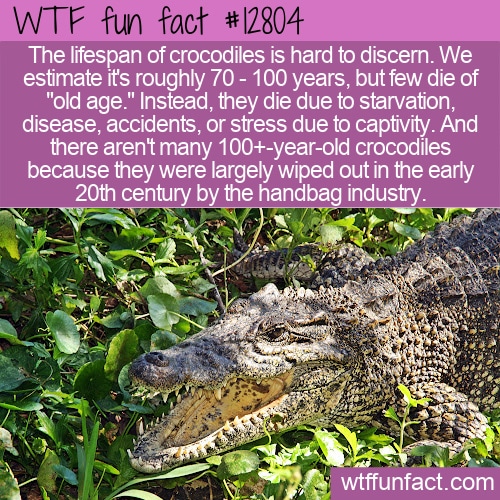 No less a scientist than world-renowned physicist Dr. Michio Kaku has pondered the question “Are crocodiles immortal?” Of course, they’re not. But they’re still fascinating in terms of their lifespan – or lack thereof.

Crocodiles don’t have a formally recognized lifespan. In fact, they tend to outlive our interest in trying to figure it out at any given time. They can certainly live to be over 100, and they’re just as vigorous at that age as they are when they’re younger.

The only real difference is that they get bigger. But getting bigger can be a problem – it means they need to eat more and are at risk for starvation. And while they might not age biologically, the longer you live the greater your chances are of being killed by disease or accident. And those are the three main killers of crocodiles.

According to an article by VICE (cited below) on crocodiles’ supposed immortality: “This is the reason we don’t happen to see crocodiles the size of Boeing 747s in the wild. Dr. Kaku also claims the standard 70-year crocodile lifespan defined by textbooks is basically because ‘zookeepers die at 70.'”

After talking to Billy Collett of the Australian Reptile Park, VICE added: “Queensland is actually home to the world’s largest captive crocodile, Cassius. Measuring in at around five and a half metres long, he’s estimated to be more than 110 years old. When I asked Billy what he thought of the proposition that saltwater crocodiles could not biologically die, he was skeptical. He did concede though that there’s not a lot of research around the aging process for crocodiles. In captivity, stress appears to stem their lifespan. In the wild, most crocodiles are relatively young because the market for handbags in the early 20th century wiped out anything older than 100 years.” – WTF fun facts