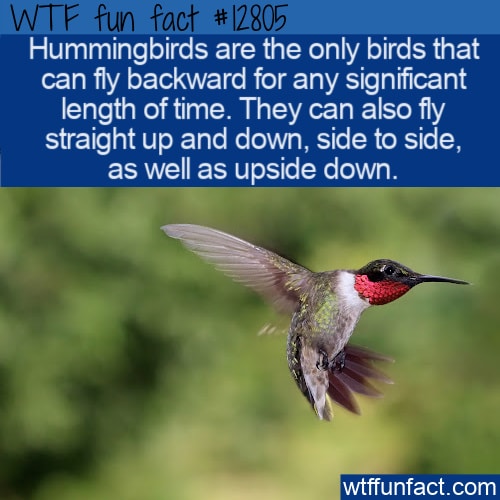 “Can hummingbirds fly backwards?” is a fairly common Google query when it comes to these little creatures. And we have to admit, we never really thought about a bird’s ability to fly in different directions.

But the answer is yes. And, in fact, they’re the only birds that have the ability to fly backwards for any significant length of time. Flycatchers, warblers, and herons can move backwards, but only as a defensive maneuver.

Hummingbird flying skills – backward, forward, side to side

According to the Audobon Society (cited below), “The hummingbird is the only bird that can truly hover. It manages this by flapping its wings 20 to 80 times a second. It can fly straight up and down. Backwards and forwards. Or upside down. And up to 75 miles an hour. But don’t worry, it won’t run into you. This bird can slow down from 25 miles an hour to a dead stop in a space no longer than your index finger.”

The trade-off is that they have very weak legs. They can only hop short distances – and not very well. So they fly just about everywhere.

Some other interesting things about hummingbirds that contribute to their uniqueness include:

If you see a chubby hummingbird, it’s likely ready to begin its migration journey. The little creatures gain around 20 to 40% more body fat before they begin their annual migrations.

Since they live for around 5 years (though a few have been known to live to 11 or 12 years), they make the long trip more than a few times in their lives.

Source: “Hummingbird Flight Is Like Nothing Else in the Bird World” — Audobon Society