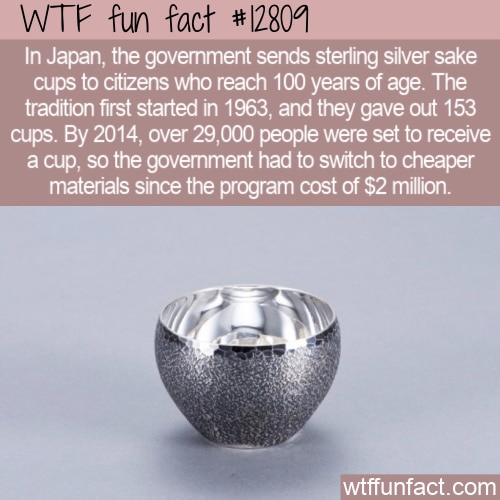 It’s long been a tradition in Japan to send centenarians a sterling silver sake cup to celebrate their big 3-digit birthday, along with a congratulatory letter. But the Japanese silver sake cup has been downgraded because so many people in Japan live to be 100 or older.

The sterling silver cup has been a tradition for over 50 years (since 1963, to be exact), but in 2015, the government was forced to change it up a bit.

Handing out that much sterling silver was getting far too expensive – to the tune of millions of dollars. Since 2015,

Now, the celebratory sakazuki is made of silver plated nickel. This halved the cost of the gifts.

According to a 2015 article in The Guardian (cited below):

“In 1963 Japan had just 153 centenarians, and as recently as 1998 the number stood at just 10,000. At the last count Japan’s 100-plus age group numbered almost 59,000, and that figure is expected to rise when the government releases new population data before Seniors’ Day on 15 September.

Last year the ministry spent 260 million yen (£1.3m) on giving the cups – each worth about 8,000 yen – to almost 30,000 people, including 25,000 women. Local media pointed out that some people die before the gifts can be distributed, forcing them to be scrapped.”

Japanese women live the longest of any other population (an average of 86.3 years).

Around quarter of Japan’s population is 65 or older, and that population is expected to reach 40% by 2050. The country citizens have not had enough children to replace their current population since the 1970s.

The country houses roughly 80,000 centenarians! So now we’re wondering if the secret is drinking a lot of sake!