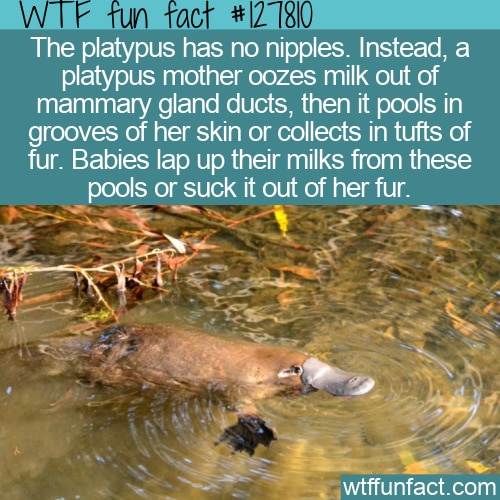 Platypus nipples are probably not the first thing that comes to mind when you think of interesting animal facts. But the fact that the creature has none is actually pretty wild.

We might think of nipples as something less than wholesome, but they serve a purpose – to feed the young.

How does a platypus feed their young without nipples?

In what may be one of nature’s strangest oversights, platypuses so have a milk duct, they do produce milk from their young, but there’s so central “outlet” from which to feed.

And while it’s bizarre to picture (but we swear this is how it works), the mothers secrete milk through their mammary glands, and it then rolls down their skin, collecting in the little grooves on their bodies. And that’s where their young find it to feed. In cases where there are patches of fur, the babies simply suck the milk out of those soaked fur patches.

It seems…less than efficient. But the platypus still exists, so it must work just fine for their species!

The platypus is a monotreme – a creature in which reproduction takes place by females laying eggs. That might not seem like a big deal, but these are mammals. So it’s actually incredibly rare. Vertebrates (which are animals like birds, fish, reptiles, etc. all lay eggs), but the platypus and echidna (or spiny anteater) are the only common mammals that do it.

When it’s born, the baby platypus cuts its way out of the egg using an “egg tooth” that grows on the end of its nose. This “tooth” is made of keratin (just like fingernails), and it falls off not long after.

Other fun facts about the platypus

According to the American Museum of Natural History (cited below), other fun facts about the platypus include:

“A female platypus usually lays only two eggs at a time and rarely leaves her stream-side den while nursing her young. When she does leave, she plugs the den opening with dirt.”

“A platypus’s bill can sense tiny electric currents produced by the bodies of small animals, helping it hunt in muddy water.”

To be honest, we never gave much thought to the platypus. They’re not much to look at (though some might say they’re cute), but they’re certainly interesting from a biological standpoint!