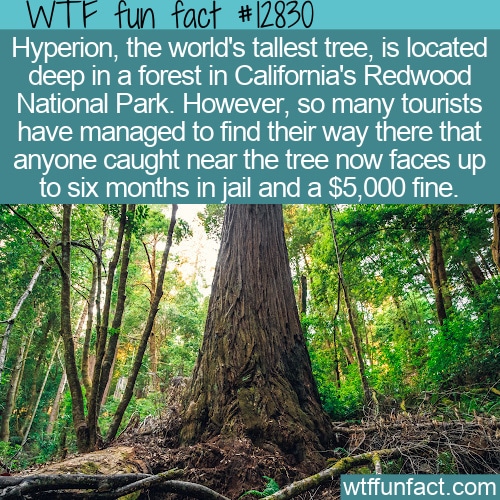 According to conservationists and no less an authority than the mighty Guinness World Records, a redwood called “Hyperion” is the oldest living tree on Earth. Of course, that only makes people want to visit it, and it’s very hard to get to. As a result of the damage done, by tourists are now being fined for visiting Hyperion.

More about the “world’s largest tree”

The mighty Hyperion is located in California’s majestic Redwood National Park. According to CNN (cited below): “The coast redwood Ssequoia sempervirens) tree is 115.92 meters (380 feet) tall, and its name is derived from Greek mythology — Hyperion was one of the Titans and the father of sun god Helios and moon goddess Selene.” Its trunk diameter is 13 feet around!

While it had long been photographed from above, it has long remained hidden from hikers on the ground.

There are no trails to the tree. In fact, getting there basically requires you to bring a machete and hack away at the surrounding foliage.

But in 2006, a pair of naturalists did find the tree – and you can imagine what happened after that.

To their credit, the park never gave out directions and never made a path so people could reach Hyperion. It has always required people to take the risk of going off the trail and potentially getting lost or hurt. There’s spotty service for phones and GPS, so anyone trying to reach the tree not only takes their own life into their hands but risks the safety of rescuers (if they’re even able to contact them) as well.

But, of course, some people need that Instagram shot. So they do it anyway.

The California park recently issued a statement threatening thrill-seekers with up to six months in jail and a $5,000 fine. After all, they’re risking the life of an ancient landmark as well as the lives of those who have to help them get out of the forest.

The statement reads, in part:

“Hyperion is located off trail through dense vegetation and requires heavy ‘bushwhacking’ in order to reach the tree…Despite the difficult journey, increased popularity due to bloggers, travel writers, and websites of this off-trail tree has resulted in the devastation of the habitat surrounding Hyperion…As a visitor, you must decide if you will be part of the preservation of this unique landscape – or will you be part of its destruction?”

Do we really need to read a blog about the tree so much that we’d risk it being destroyed? Clearly, people have different answers to that question.

And the damage caused so far by tourists includes erosion at the base of the tree, bushwacked paths away from its base so people could use the bathroom nearby, leaving human waste behind and toilet paper, and just plain old trash around the site.

Clearly, it’s not just nature-lovers who are hacking their way to Hyperion. – WTF fun facts