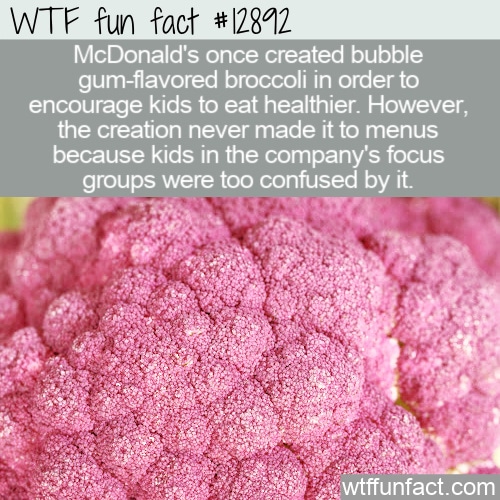 I suppose it’s better than broccoli-flavored bubblegum though.

When and why did McDonald’s make bubblegum broccoli?

In light of ever-more-disturbing news about the effects of the American obesity crisis, McDonald’s has long been asked how they’re trying to help. In 2014, McDonald’s CEO Donald Thompson revealed the fast-food chain had tried out some interesting options to help children eat healthier.

The attempt to sneak veggies into children’s diets came to light in 2014 when, according to Mental Floss (cited below), “Thompson was asked what the fast food giant was doing to provide healthier food options for children.”

As it turns out, “Three years earlier, the chain had already revamped its Happy Meal by cutting the amount of French fries in half and offering fruit as a side option. But Thompson said they had also experimented with some unconventional methods of enticing children to eat healthier.”

One of those possibilities was bubble gum-flavored broccoli. They made it, but they never sold it.

What happened to this culinary curiosity?

It probably comes as no surprise that it never quite made it past the company’s focus groups. Kids were confused and not delighted enough to make up for any skepticism.

Mental Floss notes that “the vegetable creation didn’t exactly surprise or delight its intended audience…And even the powers-that-be were unimpressed.”

“It wasn’t all that,” Thompson said.

It appears that the item may have been planned as a Happy Meal option (one that was eventually replaced by fruit slices and yogurt).

Franky, we’re surprised no one revived the idea during the era when “Millennial pink” was the color of the moment. Sure, it would have gotten some bad press, but it certainly would have been a big seller for those Instagram food photos! – WTF fun facts