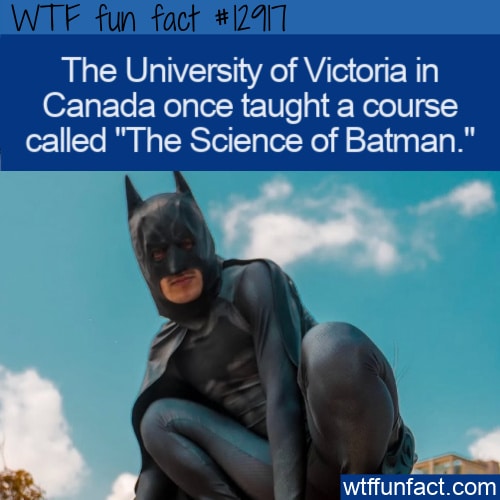 A course called The Science of Batman was proposed at the University of Victoria in Canada back in 2012, and was offered for the first time a few years later in 2016.

The science of Batman

According to HuffPost (cited below) “the course will examine how the human body can be adapted and improved based on the metaphor of the caped crusader himself” and “Offered in “alternate years” the course would make up only part of a degree and is run by the School of Exercise Science, Physical and Health Education.”

EPHE 156 is described in the course catalog as such:

“The extreme range of adaptability of the human body
explored through the life of the Caped Crusader; examines
human potential using Batman as a metaphor for the
ultimate in human conditioning; evaluates the concepts of
adaptation to exercise and injury from the perspective of
science and exercise training; examines the multiple
sciences behind exercise adaptation, musculoskeletal injury
and concussion, and limitations of the human body and
mind.”

Why teach about superheroes?

It’s hard to get students interested in courses, so sometimes professors (or their administrators) resort to gimmicks. And while they might sound silly, there’s really nothing wrong with it if it helps students learn valuable concepts or skills. The Science of Batman wasn’t about taking away tuition dollars for something mindless, in fact, it was a course about how the human body could be improved.

In some ways, The Science of Batman was ahead of its time. People are only more and more interested in things like “biohacking” and adapting the human body to extreme conditions (like space). Physiology experts travel to high-altitude locations to study these sorts of things all the time. It may even help us improve our health and live longer. So if you have to lure in students with the promise of Batman, so what?

Parents, teachers, and, yes, even executives use references to things people are interested in all the time to explain tough concepts or motivate people.