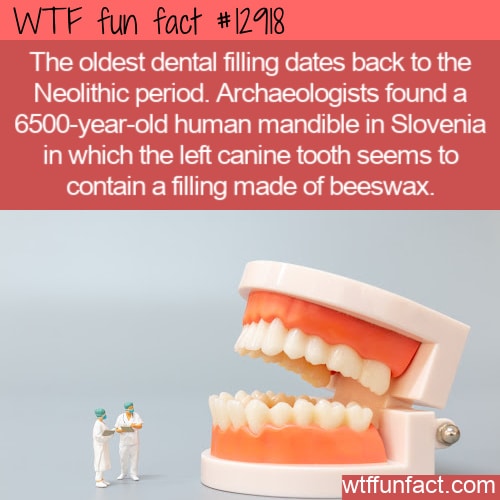 You’ve probably always wondered when dental fillings started to be a thing. Because everyone loves to think about the dentist, right?

Interestingly, some people have called dentistry “the oldest profession” since archeological evidence shows people trying to treat cavities many thousands of years ago. We’re not sure about that label, but it does make us wonder why humans weren’t built with better teeth.

Dental archaeology and the first filling

The oldest dental filling dates back to at least the Neolithic period. An international team of researchers largely based in Italy published a paper in 2012 noting that they found evidence of prehistoric dentistry in the form of a 6500-year-old mandible in Slovenia with a crown made of beeswax.

Whoever this poor chap was, he was clearly in enough pain to try and find a way to lessen it by getting his chipped enamel treated.

The researchers described how they assessed the mandible (in a paper cited below): “The use of different analytical techniques, including synchrotron radiation computed micro-tomography (micro-CT), Accelerator Mass Spectrometry (AMS) radiocarbon dating, Infrared (IR) Spectroscopy and Scanning Electron Microscopy (SEM), has shown that the exposed area of dentine resulting from occlusal wear and the upper part of a vertical crack affecting enamel and dentin tissues were filled with beeswax shortly before or after the individual’s death.”

Ok, but the next question is, is it really a filling if you’re already dead? We don’t have an answer to that or a way of knowing if the person was dead or alive when it was inserted.

The researchers noted that “If the filling was done when the person was still alive, the intervention was likely aimed to relieve tooth sensitivity derived from either exposed dentine and/or the pain resulting from chewing on a cracked tooth: this would provide the earliest known direct evidence of therapeutic-palliative dental filling.”

Is dentistry the oldest profession?

Dentistry is certainly one of the oldest medical professions (even though the first dental school in the world was opened in the 1820s in Ohio) and the first formal dental text was written in the 1500s. There’s plenty of evidence (written and archaeological) to show that fixing teeth goes back a very long way.

Whether or not it’s the oldest profession (instead of, say, what we normally think of as holding that title) is something we’ll never know. But we kind of doubt it. — WTF fun facts

Source: “Beeswax as Dental Filling on a Neolithic Human Tooth” — PLoS One