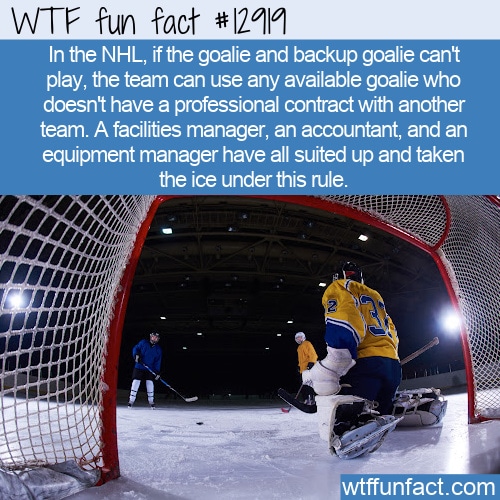 A few years ago, the NHL revisited rules surrounding the emergency backup goalie rules, but decided they were fine as is. While most of us probably have Disney movie-type visions of people being called out of the crowd to fill in, the rule is actually a little more mundane. That said, even an accountant has been called in to stop some pucks.

What is the emergency backup goalie in hockey?

NHL emergency backup goalies (EBUG) have been in the news recently because of COVID and the increasing need to call on them.

According to the NHL: “Under Rule 5.3, if both goalies are unable to continue, a team can dress and play any available goalie who’s eligible. If both goalies are injured in quick succession, the EBUG gets enough time to get dressed and then a two-minute warmup (unless he’s facing a penalty shot). If the EBUG is already on the bench when the second goalie is injured, the EBUG comes in and plays immediately.”

But the EBUGs don’t come from anywhere, they have goalie experience, which is pretty specialized (otherwise teams could just ask a bench player to suit up in goalie pads).

An article by the NHL on the role of emergency backup goalies (cited below) notes that: “Since the 2016-17 season, the NHL has required teams to have a list of local emergency goalie options for themselves and visiting teams. They’ve been used each season outside of 2020-21, when, because of the COVID-19 pandemic, the NHL required teams to have taxi squads (four to six players per team, including at least one goalie).”

There’s very little money in it, but the EBUG does get to swoop in and save the day.

Scott Foster and David Ayres are often cited as two examples of great EBUGs. Foster was employed as an accountant when he suited up as backup goalie in 2018 for the Chicago Blackhawks-Winnipeg Jets game and saved all 7 shots that came his way to win the game. Ayers was a building operator for the Toronto Maple Leafs when he came in and saved 8 out of 10 shots to help win the game.

While neither had ever played in the NHL, they did both have goalie experience in another league. — WTF fun facts