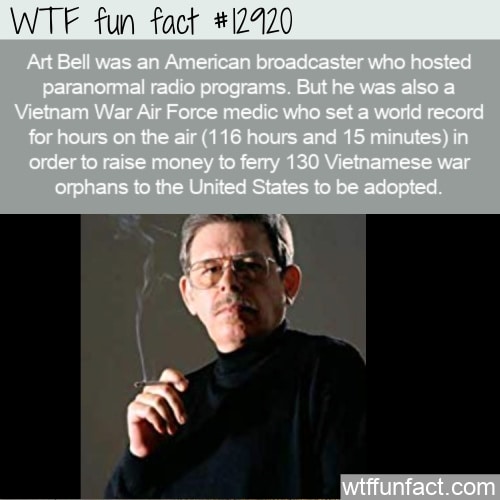 Art Bell was an American broadcaster who hosted a popular paranormal radio show called “Coast to Coast AM,” among others. But while people may know his voice, they likely don’t know about Art Bell’s Vietnam rescue mission while he was an Air Force medic during the Vietnam War.

Who is Art Bell?

He was also briefly a DJ for an English-language radio station in Okinawa. And it was there that he set a Guinness World Record for broadcasting before moving back to the U.S. to become a paranormal DJ.

According to his NYTs obituary (cited below): “His ‘Coast to Coast’ show was syndicated and broadcast from 1989 to 2003, followed by episodic returns on satellite radio and online with a program called ‘Midnight in the Desert,’ which he canceled in 2015 after he said shots had been fired at his home.”

The obit also notes that “While some critics accused him of laying the foundation for right-wing conspiracists on talk radio, Mr. Bell’s politics were not easily pigeonholed. He described himself as a libertarian, but his passion was directed less at politicians or ideology than at debunking scientific doctrine and preaching apocalyptic prophecy.”

Eventually, he dropped the political angle in favor of paranormal topics.

While the proof is unclear and Art Bell’s Vietnam rescue mission is often referred to as something he simply told people about, it has come to be accepted (and it is likely provable if someone wanted to look into it) that he set his broadcasting marathon record in order to raise money for war orphans in Vietnam.

Over 100 children had been rendered orphans by the war with no one to care for them. Bell chartered a plane with the money and brought them to the U.S., where it’s said they were adopted by American families. — WTF fun facts

Source: “Art Bell, Radio Host Who Tuned In to the Dark Side, Dies at 72” — The New York Times