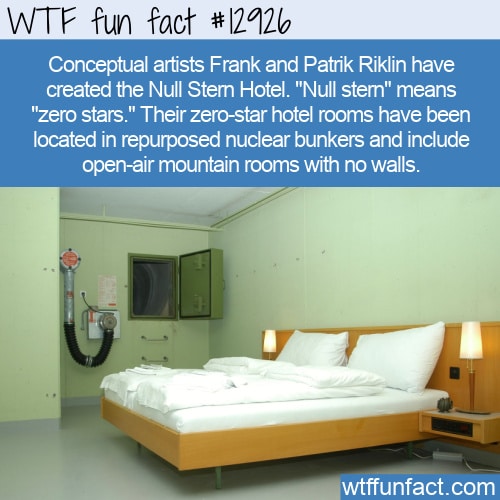 In our last fun fact, we mentioned the Null Stern Hotel in Switzerland. Some of those rooms have no walls. But let’s talk about the whole concept of Null Stern, which means “zero star,” as in a zero-star hotel.

According to Architectural Digest, their hotel rooms with no walls can be fairly posh, in a way, if they’re situated in the right location:

“Although the hotel lacks many common amenities, guests may find comfort in an on-site butler who will play a ‘central role,’ in the experience, according to [hotierl Daniel] Charbonnier. Null Stern’s slogan, ‘The only star is you,’ is a key philosophy at the alternative accommodations, where the founders strive to put the guests at the center of the stay. At all of the zero real estate suites, a butler provides meals and facilitates other requests from guests during their stay. At the anti-idyllic suite, the butler ‘provides a sense of security and care in an environment of insecurity,’ Charbonnier said.”

The concept was launched back in 2009 but began to make headlines in 2017 when their suite in the Swiss Alps got a reputation for having a waitlist of thousands (it’s up to 6000). And while the only “star” might be the guest in their open-air suites in the Swiss Alps, you can certainly get a good view of the stars.

But it all began as something slightly less glamorous than glamping in the Alps.

The first hotel that twin brothers Frank and Patrik Riklin created and named Null Stern was an old 1980s nuclear fallout shelter that they retrofitted.

According to The Guardian (cited below), it’s located in “the small Swiss town of Teufen, in the canton of St Gallen near the Austrian border.”

“Billed as the world’s first zero-star hotel, the Null Stern Hotel occupies the underground space of a nondescript apartment block. The hardened concrete structure and near-two-foot-thick blast doors were designed to take the full brunt of a nuclear or chemical attack. In time of crisis the bunker would have been able to hold more than 200 people.”

We just want to know if this is considered an Instagrammable location.

The original zero star hotel is no longer open since it has been turned into a museum, but you can still grab a room (or sign up for the waiting list at other locations, including in the mountains or at the corner of a busy street outside a gas station). — WTF fun facts