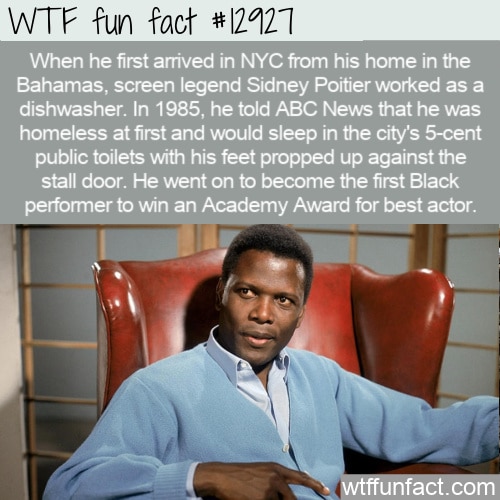 When the legendary Sidney Poitier died in January of 2022, people who paid tribute to him remembered an interview from 1985 in which he told ABC News that he arrived in NYC with $3 to his name, worked as a dishwasher, and was homeless.

Working his way up

If you’re over 40, you probably immediately recognize the name Sidney Poitier, even if you never sat down and watched “Guess Who’s Coming To Dinner.” If you’re lucky, you’ve seen him in movies such as “In the Heat of the Night” and more. Poitier was the first Black person to win an Academy Award for lead actor.

But his beginnings were far more humble. He arrived in New York City from his home in the Bahamas with dreams of being an actor but was quickly dismissed. According to his obituary in the LA Times (cited below):

“It was the most unlikely of beginnings. Newly arrived from the Bahamas with a thick West Indian accent, Sidney Poitier fumbled his lines so badly when he tried out for the American Negro Theatre in Harlem that he was advised he’d be better off getting a job as a dishwasher.

Humiliated but unbroken, Poitier bought a $13 radio and spent hours listening to the announcers, mimicking their pronunciation and the rhythms of their speech. When he returned to the theater, his audition was little better, but when another unknown actor, Harry Belafonte, pulled out of a performance, Poitier stepped into the limelight.”

Poitier’s time homeless on the streets of NYC

While his subsequent rise to stardom was the stuff dreams are made of, in 1985 he sat down with ABC News to describe those early days in New York working as a dishwasher. And with the dignity he seemed to exude so effortlessly, he dropped the bombshell that he once used to sleep in the public toilets on the streets of the city.

They cost a nickel to get into, so he’d put in his money, prop his feet up against the stall door, and sleep “uncomfortably” for the night until it was time to go back to work or auditions.

Poitier’s first film came out in 1950 and was directed by Joseph L. Mankiewicz. In “No Way Out” he played an intern in a hospital prison ward in a film that explored racial prejudice.

At the time, Black actors had such minor roles as maids and janitors that they could be easily cut out of the films when they aired in the U.S. South. — WTF fun facts