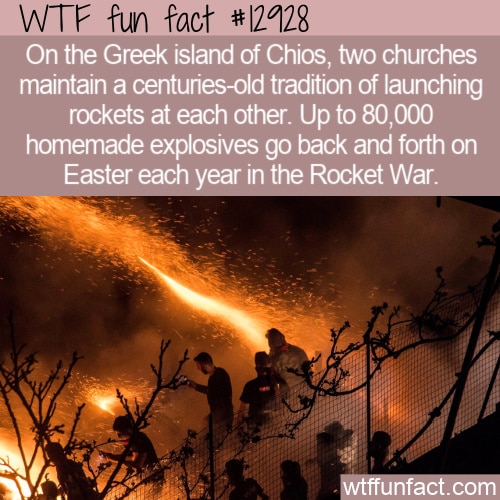 Two churches in Vrontados, Greece have a very unconventional way of marking the Easter holiday. The churches fire rockets at one another.

They used to use cannons, but those were outlawed.

We know churches “compete” for parishioners in some sense, but we didn’t realize how hostile things could get.

On the Greek island of Chios, two rival churches have been using the Easter holiday to continue to carry out a tradition that’s been going on for as many as 400 years. According to Atlas Obscura (cited below): “The churches, which sit on opposite hillsides about 400 meters away from one another, recreate a yearly ‘Rocket War’ (or Rouketopolemos) which is exactly what it sounds like.”

“Until 1889, real cannons were used in this annual performance, which no one really seems to know the origin of. After their cannons were outlawed and confiscated, the two churches in question, Angios Marcos and Panaghia Ereithiani, had to resort to homemade bottle rockets. These fiery weapons are produced throughout the year for the blazing spectacle that draws a high number of tourists.”

All in good fun (or in the name of tourism)

The churches aren’t out to literally destroy one another (at least not anymore). But that doesn’t mean there isn’t real damage.

For starters, building homemade rockets isn’t a safe hobby. People lose digits and more during these events (not unlike in the US during the 4th of July, when injury rates spike from amateurs using explosives).

Windows, signs, and outdoor furniture can be another casualty if people nearby don’t board things up. And we imagine that feels pretty inconvenient, especially around such an important holiday in the church calendar.

Up to 80,000 fire sticks are launched by both churches’ congregations, and people have indeed lost their lives trying to blow off pieces of the rival church’s bell tower. It’s probably not a very peaceful Easter service for those who attend inside either.

But because it brings tourists to the island, the tradition continues.

Atlas Obscura notes that “By the next morning, ears are ringing, throats are filled with smoke and sulphur, fires have been put out, and burns have been treated, but a winner is never officially decided on. The sign of victory is the most direct hits afflicted on the rival, but every year both congregations declare themselves the winners, and they agree to disagree and settle the score next year.” — WTF fun facts