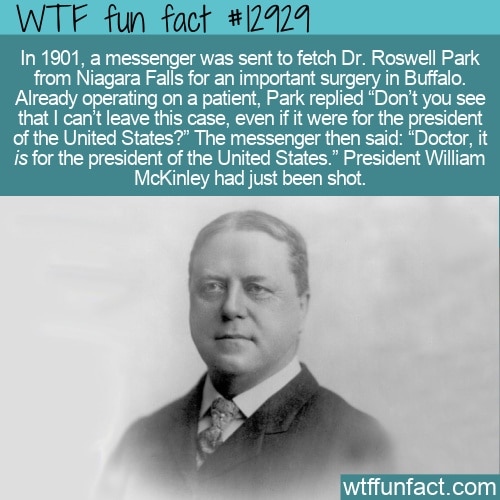 Roswell Park is a well-known, world-class cancer research and care center in Buffalo, New York. It’s named after Dr. Roswell Park, whose backstory involves his duty to his patients and the death of a U.S. president. Despite the way it may have changed history, the story of Dr. Roswell Park and President William McKinley isn’t well-known.

In 1901, the Pan-American Exposition took place in Buffalo. The months-long event is known mostly for its dark moment in presidential history though.

On Friday, September 6, 1901, President William McKinley visited the Expo and was shot in the Exposition’s Temple of Music by 28-year-old anarchist Leon Czolgosz. As the young man walked up to the president who was shaking hands with guests, he pulled out a .32-caliber handgun and shot McKinley twice – once in the chest and once in the abdomen.

The bullet aimed at his chest bounced off a bullet and merely grazed the president. But the bullet in his abdomen was the one that would end up killing him.

Before Czolgosz could do more damage or get away, he “was tackled by James B. Parker, an African-American man who had been standing behind him in line, and members of the security staff quickly subdued the gunman,” according to Roswell Park Cancer Center (cited below).

The president was still alive when he was transported to the Pan Am Emergency Hospital on the fairgrounds.

There was one doctor in town who was highly qualified to treat the president’s injury, which was complicated by President William McKinley’s weight. Dr. Roswell Park was a trauma surgeon who had experience treating abdominal wounds. However, he wasn’t at the hospital that day. He was (not far away) in Niagara Falls operating on a lymphoma patient.

A messenger was sent to fetch Dr. Park and ran into the operating room to alert him that he was needed in Buffalo. As one of Park’s assistants later recalled, Park replied “Don’t you see that I can’t leave this case, even if it were for the president of the United States?”

The messenger then informed him: “Doctor, it is for the president of the United States.”

While finishing up on his patient, Dr. Park sent a fellow surgeon to the railroad station to “make the necessary arrangements for a special engine or train” to get him to Buffalo as quickly as possible, but it didn’t work out that way. The train station was a mess when he got there and he had to wait 15 – 20 minutes for a regularly scheduled train to arrive.

In the meantime, the physicians who were present at the hospital started without him since the only source of light in the operating room was the sun, which was setting fast.

McKinley had been shot at 4:07 pm and Dr. Park arrived at 6:50 pm. By then, the surgery was nearly finished.

According to the cancer center now named after Dr. Park: “Matthew D. Mann, M.D., a gynecologist with no surgical experience involving the upper abdomen, had performed the operation. His work was complicated by the fact that the president was a heavy man with a very large abdomen, and consequently Dr. Mann was unable to locate the bullet. When Park walked into the operating room, he noticed that neither Mann nor any of the other surgeons wore surgical gloves, caps, or gowns, nor had they taken steps to disinfect the surgical area. Perspiration from one of the attending surgeons dropped into the president’s open wound. The wound was closed without a drain in place. With the surgery complete at 7:32 p.m., the president was transferred by electric ambulance to the home of John Milburn, chair of the Pan Am Board of Directors, to recover. Dr. Park and another physician rode in the ambulance with the president.”

It took over a week for McKinley to succumb to his injuries, and he died on September 14th. His autopsy showed that the cause of death was gangrene, almost certainly a result of the sloppy surgery. Dr. Park suffered from the disappointment of not getting there in time throughout the rest of his life.

But aside from a delay that he couldn’t prevent at the train station, Park was also delayed by his commitment to care for the patient he was operating on at the time. — WTF fun facts