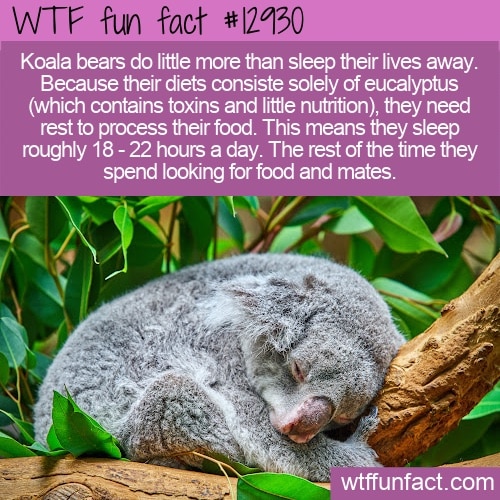 Koalas bears might be cute, but they’re some of the least energetic animals on Earth. In fact, koala bears sleep 22 hours a day (or at least from 18-22 hours). The rest of the time they spend wanding around looking for food or mates.

The koala is a marsupial (not a bear) native to Australia. They live in the eucalyptus forests in south and east Australia, which is where they find their food – it’s like sleeping at an all-you-can-eat buffet.

Considering how brutal competition can be among the world’s creatures, it’s a wonder that koalas still exist. They only eat one thing (eucalyptus), that thing is toxic, and it doesn’t reall have many nutrients. Nevertheless, they eat about 1 pound of eucalyptus a day, which is also where they get most of their water.

Their little bodies can break down the toxins in ways other animals can’t, however, while they manage to extract enough nutrients to stay alive, their diet doesn’t really provide them with any extra energy. Hence all the sleeping.

Koala bears sleep most of their lives

Beacuse eucalyptus doesn’t provide them with enough nutrients for a high-energy diet, koala bears sleep for the vast majority of the day – from 18-22 hours. During this time, their bodies need much of the energy they take in to break down the eucalyptus.

The rest of their time is dedicated to survival – eating and mating to be exact.

Between poaching and habitat destruction, koala populations have plummeted. According to National Geographic (cited below): “Land clearing, logging, and bushfires—especially the devastating 2019-2020 season—have destroyed much of the forest they live in. Koalas need a lot of space—about a hundred trees per animal—a pressing problem as Australia’s woodlands continue to shrink.”

Koalas are now on the International Union for the Conservation of Nature’s list of the 10 most vulnerable animals to climate change. And NatGeo notes that “Increasing carbon dioxide in the atmosphere is decreasing the nutritional quality of eucalyptus leaves (which is already quite low) and causing longer, more intense droughts and wildfires.”

Droughts also force koalas to go in search for water, which means they have to leave their eucalyptus trees “spending precious energy and putting them at a higher risk of predation. Predators include dingoes and large owls. They’re also at risk of getting hit by cars and attacked by dogs.”

Chlamydia is also very common among pockets of koala bear populations and causes many of the animals to be blind and infertile.